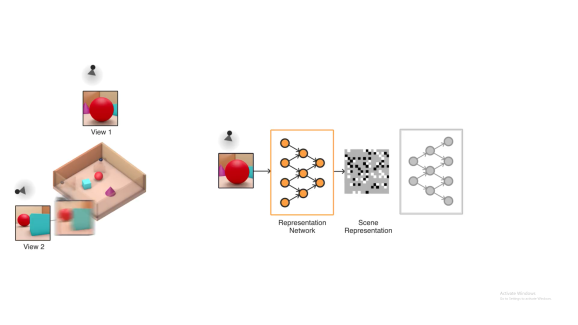 The GQN, details of which were published in Science, can “imagine” and render scenes from any angle without any human supervision or training. Given just a handful of pictures of a scene — a wallpapered room with a colored sphere on the floor, for example — the algorithm can render opposite, unseen sides of objects and generate a 3D view from multiple vantage points, even accounting for things like lighting in shadows.

It aims to replicate the way the human brain learns about its surroundings and the physical interactions between objects, and eliminate the need for AI researchers to annotate images in datasets. Most visual recognition systems require a human to label every aspect of every object in each scene in a dataset, a laborious and costly process.

Above: DeepMind’s GQN imagined this maze from static images.

Above: The GQN creating a manipulable virtual object from 2D sample data.

To train the system, DeepMind researchers fed GQN images of scenes from different angles, which it used to teach itself about the textures, colors, and lighting of objects independently of one another and the spatial relationships between them. It then predicted what those objects would look like off to the side or from behind.

Using its spatial understanding, the GQN could control the objects (by using a virtual robot arm, for example, to pick up a ball). And it self-corrects as it moves around the scene, adjusting its predictions when they prove incorrect.

Above: Another 3D maze imagined by the GQN.

The GQN isn’t without limitations — it’s only been tested on simple scenes containing a small number of objects, and it’s not sophisticated enough to generate complex 3D models. But DeepMind is developing more robust systems that require less processing power and a smaller corpus, as well as frameworks that can process higher-resolution images.

“While there is still much more research to be done before our approach is ready to be deployed in practice, we believe this work is a sizeable step towards fully autonomous scene understanding,” the researchers wrote.