ZipRecruiter, one of the largest online employment marketplace in the U.S., is using artificial intelligence to streamline the candidate selection process.

A new feature launching in the next two weeks called Candidate Calibration has employers rate potential matches for a job. For every applicant they rate positively, ZipRecruiter surfaces the job posting to other, similar candidates in its database of 10 million monthly users.

Candidate Calibration drove a 50 percent increase in the number of employers who found a candidate they liked enough to invite him or her to apply, ZipRecruiter said.

“When you’re putting 50, or 70, or 150 candidates in front of employers, you’re overwhelming them with applications,” CEO Ian Siegel told VentureBeat in a phone interview. “Employers know what they like when they see it.”

Already, ZipRecruiter is using machine learning to inform candidates of new job postings via email and text messages, and Seigel sees Candidate Calibration as an evolution of that work.

“[AI] revolutionized our business,” said Siegel. “To say that the market appreciated it is an understatement. It re-accelerated our growth.”

In 2015, ZipRecruiter opened an R&D center in Tel Aviv, Israel focused on machine learning. It has grown to 50 employees, many of whom work on the algorithms that analyze billions of data points to match job seekers with open positions. 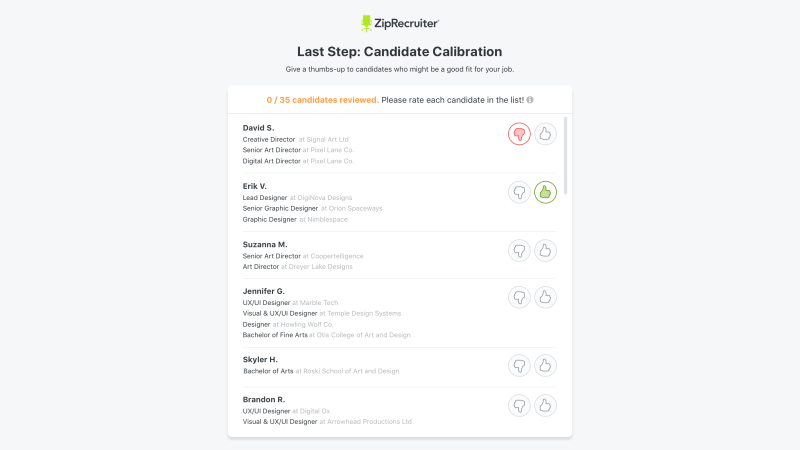 ZipRecruiter’s old business model was more or less a shotgun approach to job matching, Siegel explains: Using its tools, companies could post a listing to more than 100 social networks, talent communities, boards, and forums every month. But while that worked well for some of its clients, others wanted a more curatorial approach.

“It started to work too well,” Siegel said. “What employers want is a handful of highly qualified candidates. That’s why they use recruiters — that’s the service they provide.”

So ZipRecruiter pivoted, choosing to de-emphasize job descriptions in favor of AI-powered sorting tools. Now, thanks to proprietary algorithms, it can surface candidates starting with no more than a job title, using skills, years of experience, recency of titles, resume length, location, application rate, and other factors. For example, if a customer specifies that they’re searching for a product manager in Los Angeles, they’ll get results instantly. Once the would-be employees submit an application, employers can screen them with online questionnaires and export the data for analysis in other software.

The private company, which has close to 1,000 employees, was founded in March 2010 and is based in Santa Monica, California. More than 250,000 companies, including Ford, Netflix, Wells Fargo, and Burger King, have used its recruitment software.

ZipRecruiter has raised $63 million to date since 2014.