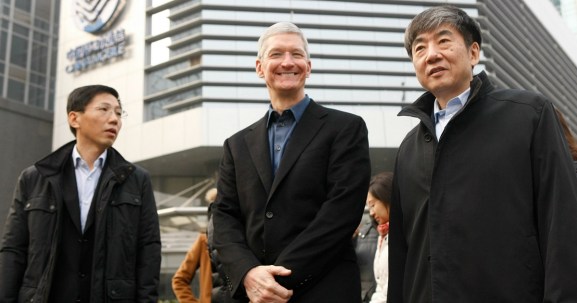 As tensions continue to escalate between the United States and China over a U.S. plan to tax $50 billion in Chinese products, Apple is concerned that China’s government will create regulatory and shipping hurdles for its products, The New York Times reports today. The concern stood out in a generally flattering profile of Apple CEO Tim Cook, who is said to be simultaneously working with both governments to maintain Apple’s market strength, despite personal and other issues.

Led by President Donald Trump, U.S. officials have started a trade war with China in an effort to wring concessions from the country, which has surged economically over the past two decades due to inexpensive labor and lax intellectual property protections. Technology companies such as Apple have complained about infringement on their innovations while growing increasingly dependent on foreign labor to manufacture their products, issues the U.S. has worked unevenly with China to resolve.

According to the report, Trump’s administration has explicitly told Cook that it will not place tariffs on Chinese-assembled iPhones — a major guarantee for the company — but Apple is concerned about potential actions by China’s government. Specifically, Apple is said to fear that the Chinese government will cite national security concerns as a reason to impose bureaucratic delays on its supply chain and finished products, mirroring recent U.S. actions that have penalized Chinese telecom companies Huawei and ZTE. Chinese authorities are reportedly already delaying Ford vehicles at Chinese ports, a situation that could dramatically impact availability of any or all Apple products during the upcoming holiday season.

Cook’s effort to keep Apple on good terms with both governments has included talks with U.S. and Chinese leaders, including a move to work with China’s Xi Jinping that employees of Apple’s manufacturing partner Foxconn dubbed “Red Apple,” referring to the official color of the Chinese Communist Party. The company has also bent to Chinese demands regarding app censorship and access to Chinese citizens’ iCloud accounts. At the same time, Cook has flattered Trump and his top economic adviser, promising economic gains while declining to publicly correct inaccurate statements made by the president.

The impact of trade hostilities on Apple’s upcoming product releases could be tremendous. Apple generally debuts its most important updates in September, ahead of the holiday shopping season, and sees a large percentage of its annual profits from its September through December sales. Resolving the trade dispute quickly would decrease the likelihood of manufacturing disruptions for upcoming iPhones, iPads, and Macs, most of which will be assembled in Chinese or Taiwanese factories weeks or months before shipping to other countries.