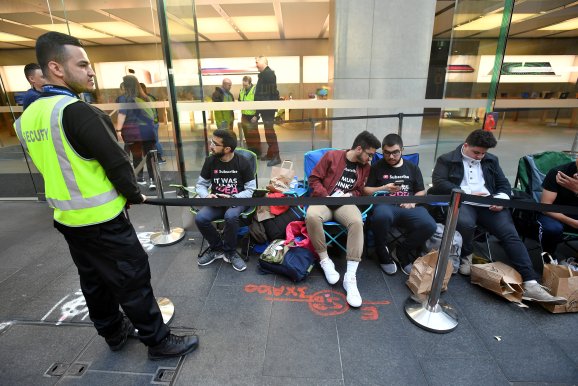 Apple customers camp outside of Sydney's flagship Apple store on the first day the iPhone 8 went on sale in Sydney, Australia, September 22, 2017.

Australian regulators have been successful in a lawsuit brought against Apple for anti-consumer practices, as the Australian Federal Court slapped the company with a $6.6 million fine. The suit alleged that Apple used a software update to disable hundreds of iPhones and iPads, flashing an “Error 53” message on devices that had been serviced by unauthorized repair shops and then refusing to unlock devices displaying that message.

At the core of the Australian suit is an issue that has attracted international regulatory attention: Apple’s stated unwillingness to fix devices that have been opened by third-party repair shops. While Apple told customers that it has no obligation to repair devices that were previously serviced by unauthorized technicians, the Australian Consumer Law and similar laws elsewhere make it clear that this practice is illegal.

“The mere fact that an iPhone or iPad had been repaired by someone other than Apple did not, and could not, result in the consumer guarantees ceasing to apply,” said Australian Competitor and Consumer Commission (ACCC) commissioner Sarah Court. The court found that Apple violated the law by telling 275 customers it would not fix their devices.

Reports suggest that the ACCC’s investigation sparked a change in Apple’s actions within Australia, including outreach to around 5,000 customers, compensation for those with Error 53-bricked devices, and corrected information about warranties and consumer law on the company website and in its stores. Additionally, Apple had issued a software update to fix Error 53 devices in February 2016 and successfully dismissed a U.S. lawsuit over the issue two years ago.

However, as recently as this year Apple has continued to release software updates that trigger error messages based on unauthorized part replacements, which third-party shops believe may be an effort to test the waters with regard to more restrictive policies. The company has also used software updates and its website to warn customers about risks they are taking by proceeding with unauthorized repairs.