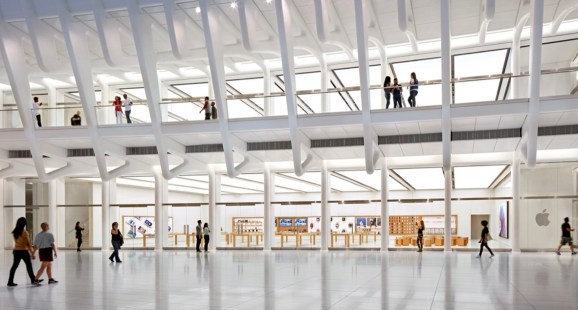 Online shopping has continued to win customers away from brick-and-mortar retailers for the past decade, but Apple retail chief Angela Ahrendts is bullish on the company’s physical stores. In a Cannes Lions interview released today, Ahrendts said that while she believes shopping will continue to move online over the next five years, actual purchases will still largely be done at brick-and-mortar stores.

The smart outside guys, they don’t say retail’s dying. They say digital’s going to grow at three times the rate of physical. But in the next five years, and this is a McKinsey number … 75 percent of the people will shop online — shop, to ‘learn’ — but 75 percent of the business will still be done in physical stores. And so retail’s not going away. Retail’s not dying. But it has to evolve … I think it has to serve a bigger purpose than just selling.

Ahrendts’ perspective might be seen as overly optimistic or self-serving, given the physical store portfolio she presides over, which now includes over 500 locations across the world and is still growing, despite rare closures in Simi Valley and Atlantic City over the last year. However, her take on the supposed “death” of brick-and-mortar retailing is important because of her stores’ incredible profitability and her own impressive retail background.

Apple’s brick-and-mortar stores have spent nearly seven years as the world’s top earners in sales per square foot, regularly outranking even luxury fashion brands such as Tiffany and Lululemon. Prior to heading up Apple’s retail side, Ahrendts led the respected and successful luxury brand Burberry, and she has since focused on tightly integrating Apple’s physical and online shops.

It’s unclear how broadly McKinsey’s forecast of continued physical retail business will apply to the broader retail sector, as Apple’s stores are in a fairly special position. Beyond actually selling products and acting as hands-on showrooms, Apple’s stores provide local repair services, classes, and free internet access for customers, virtually guaranteeing foot traffic at all hours. As with the Simi Valley and Atlantic City closures, one key factor in a physical shop’s growth (or failure) will likely be the economic conditions of the malls where it is located, not just the strength of the retailer itself.