Blinkist, a German startup that creates abridged versions of popular nonfiction books, has raised $18.8 million in a series C round of funding led by Insight Venture Partners, with participation from Greycroft, IBB Bet, and E.ventures.

Founded in 2012, Blinkist condenses popular nonfiction titles into shorter versions designed to be read in 15 minutes or less, using subject-specific experts to create the “books-in-blinks” versions. Example titles include Barack Obama’s The Audacity of Hope and Richard Dawkins’ The Greatest Show on Earth. Available on the Web, Android, and iOS, Blinkist also offers audio versions of the books.

Though users can access one read per day for free, to unlock Blinkist’s library of shortened nonfiction titles requires a subscription, which weighs in at $12.99 per month or $6.67 per month when charged annually. 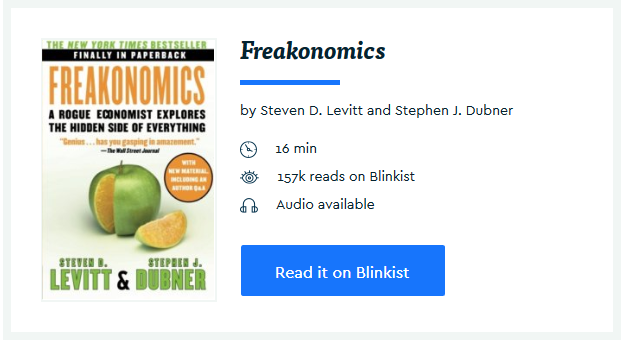 Some reports suggest that mobile phones, and the internet in general, have had a detrimental impact on the human attention span. And individuals caught between working long hours and trying to maintain a happy family life may struggle to find time to brush up on their economics knowledge. These factors could partly explain how Blinkist has amassed some 6 million users globally.

“We’ve experienced exciting growth over the past five years, but as a company, we are only just beginning to scratch the surface when it comes to the international opportunities that lie ahead of us,” said Blinkist cofounder and CEO Holger Seim. “The problem that we are solving for millions of people across the world is one that we see every day; the significant gap between people’s desire to read and learn more and the actual time they spend doing so.”

Blinkist had previously raised $16 million, and with another $18.8 million in the bank the company said it plans to expand its team in Berlin and hire country-specific managers to grow internationally. Additionally, Blinkist said that it wants to make its books available in languages other than English and German.

“The new investment from Insight Venture Partners will help us to realize our company’s potential and establish Blinkist as a leading destination for lifelong learning,” Seim continued. “We’ll use the funding to deliver a broader set of topics and formats to our ever-growing and diversifying user base, in addition to localizing the Blinkist experience as we move into new markets.”