As part of efforts to stem the flow of hateful content on its platform, Twitter announced today that it’s acquiring Smyte, a startup that “specializes in safety, spam, and security issues.”

According to TechCrunch, this is Twitter’s first acquisition since December 2016, when it bought mobile app startup Yes, Inc. A graduate of Y Combinator’s Winter 2015 batch, Smyte previously counted Quora, TaskRabbit, and Meetup among its customers. It was founded by Pete Hunt, Julian Tempelsman, and Josh Yudaken, former engineers with experience at places like Google, Facebook, and Instagram.

“The Smyte team has dealt with many unique issues facing online safety and believes in the same proactive approach that we’re taking for Twitter: stopping abusive behavior before it impacts anyone’s experience,” Twitter wrote in a blog post announcing the acquisition. Specifically calling out Smyte’s review tools, Twitter said it would be integrating Smyte’s technology into its products “in the coming months.”

Smyte’s platform essentially helps companies classify good or bad actions on their apps in real time, review them, and take bulk action against them. In the past, companies either used a REST API created by Smyte or Smyte pulled data directly out of a company’s app to create rules for how data should be classified. An old version of Smyte’s website advertised built-in machine learning models, as well as the ability for companies to create their own using IPython, scikit-learn and TensorFlow. 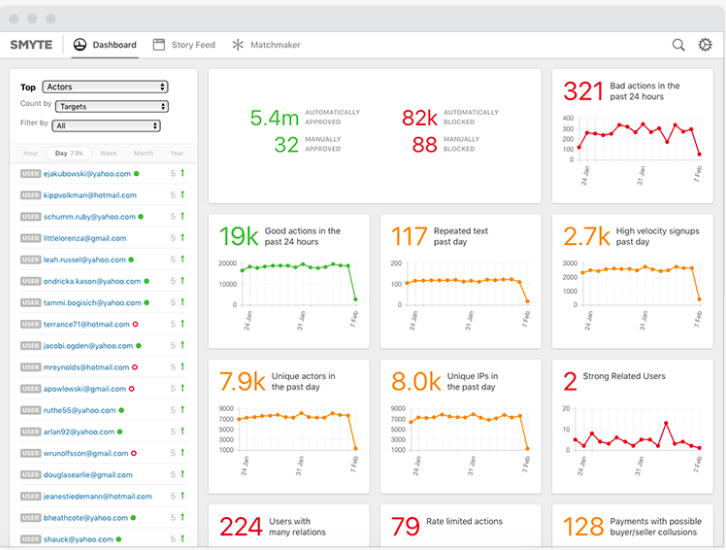 The Smyte acquisition comes a month after Twitter revealed to reporters that it’s starting to limit the visibility of tweets from people with a history of behaving badly on the platform — depending on how often they’ve been blocked or how many of the accounts they’re associated with have been punished for violating the terms of service. It’s all part of what the company calls a plan to promote “healthy conversations” on its platform.

But it’s still not hard to find users complaining that Twitter has been slow to take action against trolls and bullies. As is the case with any platform that contains hundreds of millions of users, Twitter’s actions to stop hateful conversations won’t be noticeable to all users.