Riding a maker movement wave, Paris-based Usine IO opened in 2014 to help entrepreneurs pursue their hardware startup dreams. Since then, the company has often been touted as one of the French Tech ecosystem’s crown jewels by those eager to demonstrate the growing momentum and creativity of France’s entrepreneurial scene.

But after three years, Usine IO is making a major change, moving out of its current 1,500-square-meter space, with its fully equipped fab lab. This summer, the company will relocate to a smaller space to focus on advising corporate and startup projects while continuing to run its Focus accelerator that launched last year at Station F, the Paris-based startup mega campus located around the corner.

“Usine IO is a startup itself, looking to define its business model,” said cofounder Benjamin Carlu. “And what we do best is coaching hardware projects. And that’s why we’re reducing the space. And it brings us to the next steps, in terms of digital tools to help people.” 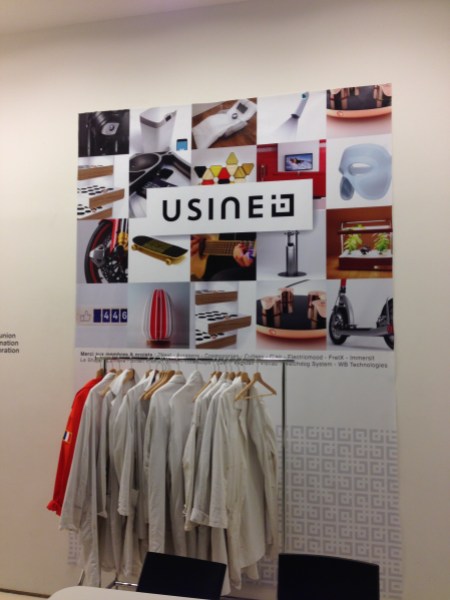 Usine IO (“usine” is the French word for “factory”) launched in 2014 after raising money from several investors, including Xavier Niel, the telecom entrepreneur who funded the creation of Station F.

The company’s massive space included tooling shops that featured industrial 3D printers, laser cutters, and other equipment that allowed entrepreneurs to get a product idea in the prototyping phase ready for manufacturing.

Entrepreneurs could become members by paying a subscription fee, which entitled them desk space at Usine IO and included access to tools and mentorship. Along the way, Usine IO has hosted more than 580 projects, and the 450 startups that have passed through have raised more than $295 million via venture capital and crowdfunding campaigns, according to Carlu.

Here’s Carlu talking about the business in early 2017:

Founders also talked about bold international expansion plans, but those never materialized. Instead, the business began to evolve more locally.

Last fall, Usine IO launched Focus, an accelerator located on the Station F campus that brings in batches of startups for a four-month program. The first batch of six focused on startups looking at autonomous and connected vehicles. Focus announced a second batch in late May around the theme of Industry 4.0.

Meanwhile, Usine IO began re-examining its own business and crunching data to see what was working and what wasn’t.

The company had expanded to offer events and corporate and startup advising services, as well as its basic model for entrepreneurs. But a number of changes in the landscape — such as the growth of accelerators and incubators across the country, greater availability of hardware tools, and a shift away from consumer hardware to B2B hardware — convinced Usine IO leaders it was time to switch gears.

So this summer the company will relocate to an office about a third the size of its current location, Carlu said. The company is getting rid of the big desk system for startups. The new space will still have a product design center, where project owners can meet with designers and experts, as well as a lab for experimentation.

But Usine IO will no longer offer the subscription service for product developers and startups and will instead concentrate on industrial coaching and services that help bigger companies as well as startups spark innovative ideas and develop their own internal products.

Carlu said the shift was a tough decision, but it was important for the business to adapt to changing circumstances.

“As a manager, it’s a [difficult] decision,” he said. “But on the other side, the team is motivated and we are planning great things for this new space.”