Back in January, Facebook announced that it would be banning cryptocurrency advertisements, saying at the time that cryptocurrencies were “frequently associated with misleading or deceptive promotional practices.” Now, the company is somewhat reversing course.

Starting today, Facebook will now allow some ads that “promote cryptocurrencies and related content.” Advertisers first have to submit an application, where they’ll have to provide a link to their website domain and provide further information about their business, such as what regulatory licenses they hold and whether their company is traded on any public stock exchange. 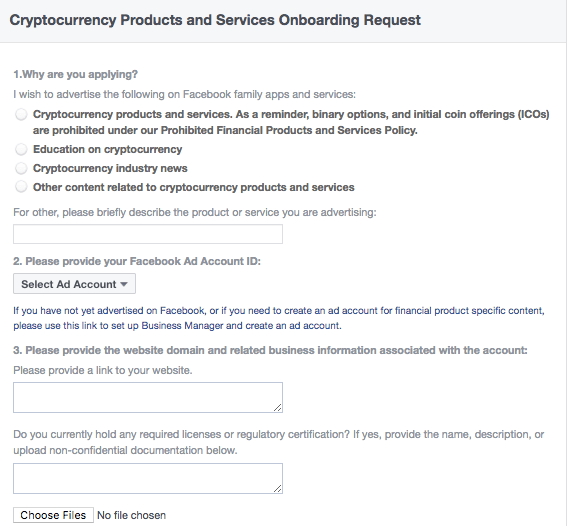 Above: Some of the questions advertisers will have to answer in order to get approved to run a cryptocurrency ad.

Advertisers also have to agree to the stipulations laid out in the “Facebook Cryptocurrency Ads Addendum.” The addendum states that “your eligibility to display Cryptocurrency Ads may be subject to such conditions and restrictions as Facebook may determine, and may be withdrawn at any time with or without notices,” and asks that companies “promptly give Facebook all reasonable co-operation and assistance in the event of any regulatory investigation or legal action relating wholly or partly to your use of Facebook.”

In a blog post laying out the changes, Facebook product management director Rob Leathern emphasized that when Facebook initially announced its cryptocurrency ad ban in January, “we also made clear [at the time] that ‘this policy is intentionally broad while we work to better detect deceptive and misleading advertising practices.'”

Google and Twitter announced that it would also be banning ads promoting cryptocurrencies and related content. Google announced in March that it its ban would roll out starting in June. A Google spokesperson told VentureBeat in an email that there would be “no changes” in response to a question from VentureBeat on whether Facebook’s announcement would result in any tweaks in Google’s policy. Twitter’s ban rolled out starting in March.

Facebook’s revised stance on cryptocurrency ads also comes as it is still working out some kinks in its revised policy on political ads. In April, the company announced that it would start verifying the identities of administrators of large pages and those who wanted to run political ads by requiring them to send in a copy of their ID and verifying their mailing address.

The company also announced that any advertisement that deals with one of 20 topics that Facebook deems to be “issue ads” will have to include a “paid for by” disclosure. All political advertisements paid for by verified advertisers are also available for any user to view in Facebook’s new political ad center. Currently, the political ad archive is only available in the U.S., but the company plans to roll it out to other countries soon.

The nonprofit news outlet Pro Publica recently found examples of around 40 ads that should have been labeled as “political ads” by Facebook, but were not. Facebook has told Pro Publica and other outlets that “enforcement is never perfect at launch, but that’s why we have processes in place for people and advertisers to help us improve.”

VentureBeat has reached out to Facebook for more detail on how it will enforce its new cryptocurrency ad policy, as well as to Google and Twitter about how these changes may affect their stance.