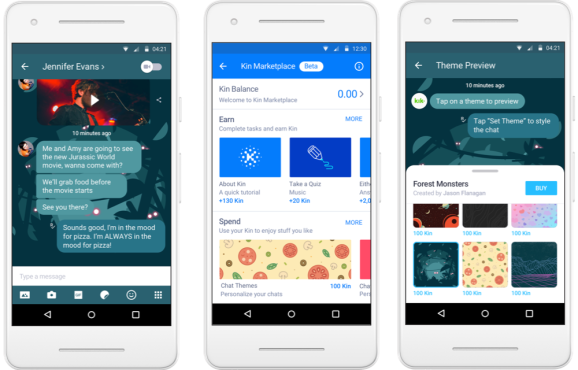 Initial Kin currency given free to all users of the app can only be spent on new app themes. This marks the first time the chat app’s 15 million monthly active users will be given the choice to customize the chat background, but the use case is far from the ambitious plans Kik has for its cryptocurrency.

Users will be able to earn Kin by getting the right answer in trivia quizzes or by completing polls and answering questions about things like what they spend their free time doing or their overall opinion of the Kik app.

“We’re starting off with 1,000 users because it’s such a new technology, and we want to make sure everything scales and that it’s sturdy, and then we anticipate we should be able to grow that number quite quickly. So 1,000 for now, with a potential of growing,” product manager Laura Newton told VentureBeat in a phone interview.

The road to the launch of Kin started back in May 2017 with the creation of the Kin Ecosystem Foundation to manage the cryptocurrency. A near $100 million token sale took place last fall.

Kin adoption is meant to be driven by the Kin Rewards Engine, designed to grow an ecosystem that encourages developers and businesses to make engaging content or bots. Users are then rewarded for staying engaged on the platform in order to attract new users and retain old ones.

The more users engage with content and spend time on the platform, the more Kin they can earn to do things like purchase premium content or other goods within the Kin Marketplace or elsewhere online with its Ethereum-based cryptocurrency.

A Kin software development kit has also been created to give other platforms like game engine creator Unity the ability to follow a similar approach to the Kin Rewards Engine and build an ecosystem that rewards engaged gamers with cryptocurrency.

No specific date has been set for opening the Kin Rewards Engine to a larger group of developers.

“We’ve started by doing this Kin launch, our first integration of the SDK to tackle learnings that come with it. After we start doing that, I think we’ll start to look at other advances in the app, and bots will be part of that throughout the year. So it’s on our roadmap, but it’s not something that we’re focused on right now,” Newton said.