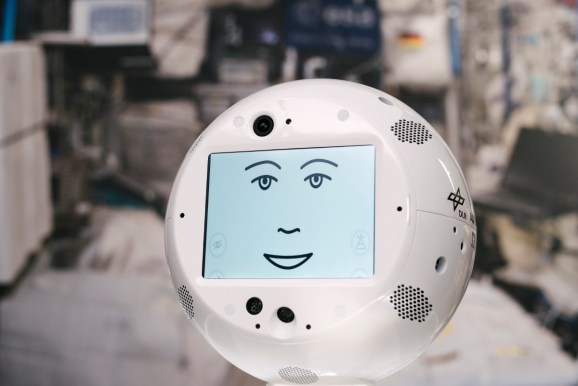 A SpaceX Dragon rocket leaving Cape Canaveral today will deliver 5,900 pounds of research supplies to the International Space Station (ISS). Included in the payload will be the space station’s very first AI-powered assistant.

Named Crew Interactive Mobile Companion (or CIMON for short), the floating orb is a little larger than a basketball and will use an air propulsion system to slowly move around the ISS. Commissioned by the German Aerospace Center, CIMON has been in development for two years and was made by Airbus and IBM.

Like in the Stars Wars series, Interstellar, and basically any space movie ever made that includes a robot that doesn’t go rogue and try to kill the humans, CIMON will act as both helper and companion, and is made especially to work with Commander Alexander Gerst.

CIMON will deploy a range of IBM Watson artificial intelligence, including computer vision and various forms of natural language processing.

Using microphones, cameras, and a battery of other sensors, the AI will be used to help Gerst carry out experiments to explore how the crystallization of materials differs in space compared to Earth, an IBM spokesperson told VentureBeat in an email.

CIMON was trained with astronaut lingo and instructional data to walk Gerst through dozens of steps related to his research project either by showing him videos, talking him through the process, or recommending tools.

Interaction between astronauts on the Horizons mission aboard the ISS will be used by Airbus and IBM to continue to improve how CIMON operates and assists humans in space.

So while CIMON was made to help Gerst carry out research, it’s also the beginning of the study of human-machine conversational AI interaction in space.

In the aforementioned science fiction movies, robots were able to provide humans help in scientific endeavors and accomplishing mundane tasks, but they also provided a cure to loneliness and isolation, a friend to confide in while traveling through the void of space.

Makers of AI assistants like Amazon’s Alexa, Microsoft’s Xiaoice, and even the chatbot for Alaska Airlines have talked about conversational AI providing humans respite to loneliness not as some distant goal but as something they observe people doing today with casual conversation or chit-chat.

“For us, this is a piece of the future of human spaceflight. I mean, if you go out to the moon or to Mars, you cannot take all mankind and engineers with you, but with an artificial intelligence you have instantly all the knowledge of mankind,” said German Aerospace Center CIMON project lead Christian Karrasch in the video below.

The name CIMON (pronounced “Simon”) is derived from the character Professor Simon from Captain Future, a science fiction comic book in the 1940s and ’50s made into a Japanese cartoon in the 1970s that was translated into German.