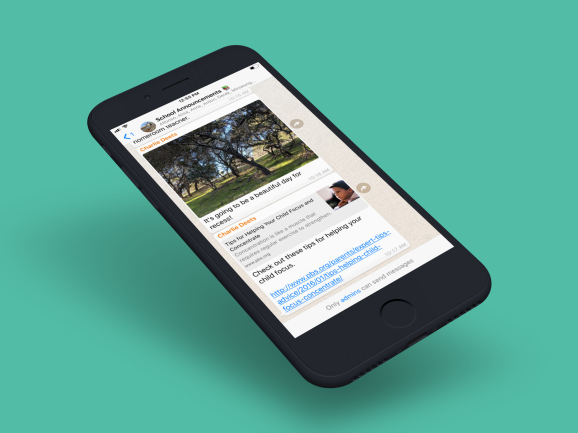 WhatsApp today announced a new control for group administrators to limit activity so that they are the only member of the group who can send messages. WhatsApp groups can include up to 256 participants.

The approach could greatly alter what it’s like to be a part of a WhatsApp group, changing them from a place for conversation to a place for receiving announcements from, say, a school group, political organization, or professional group.

The new feature is the most recent way Facebook-owned WhatsApp has given administrators more control over groups.

Last month, WhatsApp launched a series of new features, including group descriptions that can be set by admins only and which detail the purpose, guidelines, or topics of discussion for a group, and a new policy that group creators can no longer be kicked out of a group they started.

The launch of new features came days after the company told the New York Times it planned to give group administrators more control.

Facebook has been criticized for allowing its end-to-end encryption chat app to be used as a means to spread fake news and to incite animosity toward racial or ethnic groups as a result of fake information, particularly during elections in India last month.

Criticism continued earlier this week when two men in the Indian state of Madhya Pradesh were attacked by a mob following the circulation of a message in WhatsApp groups that 500 people dressed as beggars were assaulting people to harvest their organs. After joining WhatsApp groups, police found the messages were being spread by three men, who were later arrested, Reuters reported.