Users can now see more information than ever before about how advertisers are using some of the largest social media platforms, thanks to ad transparency tools released earlier this week by Facebook and Twitter. But just because users have more information doesn’t mean it’s easy for them to parse.

As a refresher, the release of these new ad transparency tools follows criticism aimed at Facebook and Twitter over the past year and a half that they didn’t do enough to stop Russia-linked organizations from attempting to sway U.S. voters through deceptive advertising during the 2016 U.S. presidential election.

Exactly how many users these foreign players were able to influence on the platforms is unclear, as Russian-linked troll organizations like the Internet Research Agency (IRA) had been operating for years. Facebook estimated that accounts associated with the organization paid for 3,000 Facebook ads that reached about 10 million people in the U.S. before and after the election. Twitter estimated that over 2,700 accounts associated with the IRA posted around 131,000 tweets between September and November 2016.

Congress eventually called executives from Facebook, Twitter, and Google to testify, during which process two big issues with the platforms’ advertising practices became evident — one, with so many advertisers on their respective platforms, it was difficult for some of these platforms to tell who these advertisers were and where they were coming from. Second, these companies hadn’t previously thought all that much about how to prevent foreign interference in elections on their platforms.

The new feature Facebook released this week is called “info and ads” and is basically just an additional tab that will be available on every Page’s Facebook account. The “info” section will show you when a Page was created, as well as whether the Page ever changed its name. Facebook has said that it is looking to add more information to this section in the coming weeks.

“Ads” takes a user to all of the ads that an account is currently running across Facebook, Instagram, and Messenger. You can also search the ads a Page is running by country, if applicable. For a large company, the differences in ads run between countries is going to be pretty innocuous — In the U.K., for example, the company is promoting its work with students in the London College of Fashion, while ads in the U.S. advertise how the nonprofit Operation Smile uses Microsoft’s cloud technology. 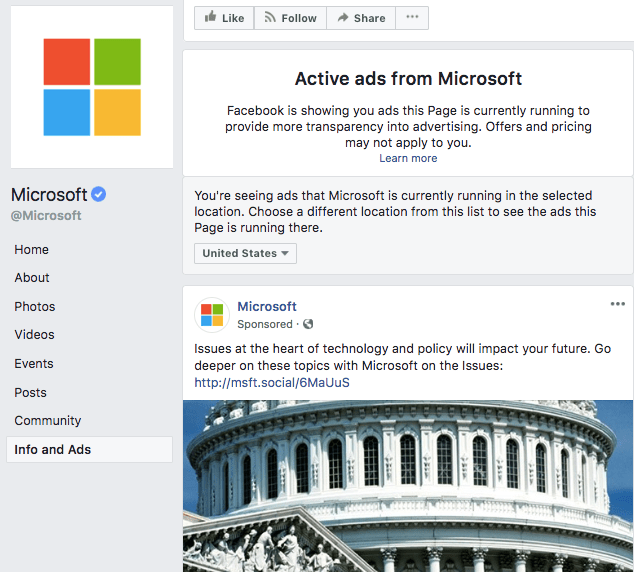 Twitter calls its newly released tool an “Ad Transparency Center,” and it is available to view at ads.twitter.com/transparency. Here you can search for the handle of the account you want to see promoted tweets for. The tool will then pull up all of the tweets that particular account has promoted within the last seven days. Twitter will simply show you the promoted tweet, as well as how many likes and retweets it got. 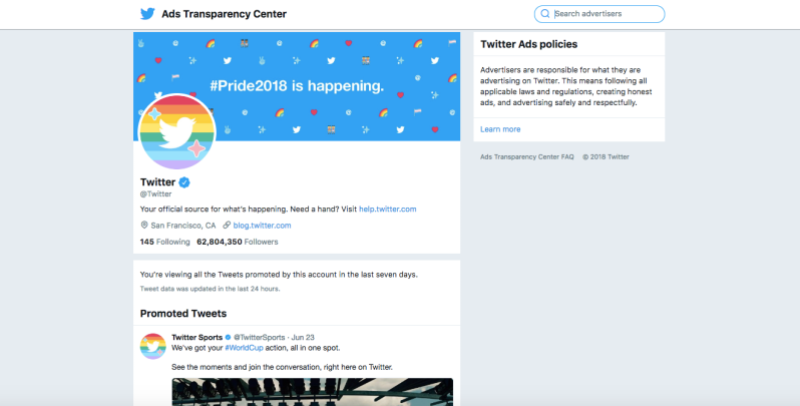 While these tools are fairly easy to use, both have serious limitations. Facebook’s new tool only displays the ads a Page is currently running, while Twitter only makes promoted tweets from the last seven days available to view. This limited snapshot makes it difficult to try to ascertain whether an account has a previous history of deceptive advertising.

On a conference call with reporters yesterday, Facebook COO Sheryl Sandberg said that the company will consider making an archive of past ads from Pages available to view in the future, but added that “this is a pretty big project.” A Twitter spokesperson told VentureBeat yesterday that the company will also “see if we need to adapt [the length of time] in the future” but didn’t commit to any particular changes.

Facebook’s political ads and “issue” ads [those that deal with one of 20 issues deemed by Facebook to be politically contentious]  have been viewable for the past month in a searchable database, separate from the “info and ads” tab. The address for this database is facebook.com/politicalcontentads.

Here, you can search for political ads by one of any number of topics — candidate name, political party, or issue. A search for ads promoting Sen. Kirsten Gillibrand (D-NY) turned up 600 results. Facebook’s archives contain both active and inactive ads run on or after May 7, the day Facebook first started archiving political ads. You can see who paid for an ad, as well as how many impressions it got, how much the group paid for the ad, and a percentage breakdown of the gender, age, and location (on a state-by-state basis) of people who have viewed the ad.

What’s most striking about Facebook’s political ad database is how noisy it is — it shows just how easy it is to deploy a large number of ads on the platform. Ads with identical text and images can appear upwards of 10 times in the same search, presumably because each ad is targeted to a different demographic of users.

It’s also worth noting that if you search by candidate name in the political content database, it turns up all ads mentioning that candidate — not just those run by the candidate themselves. In the above example, a search for “Kirsten Gillibrand” turns up ads from her official Facebook page, from a news organization that is interviewing her at an event in the coming weeks, and from a candidate for California political office that is touting Gillibrand’s endorsement.

So if someone wanted to do a 10-second search to see all the ads their governor is running, it might be easier to go to that governor’s official Facebook page and click “info and ads.” There they will be shown only the ads that page is running. However, the “info and ads” tab only shows active ads — while the political ad database shows both inactive and active ads. Creating more targeted search options is an area for Facebook to improve upon as it continues to build its political ad database.

Political ads on Twitter are housed in the same searchable database as all other types of ads, so you have to again search for political ads by account handle. For political tweets, Twitter shows the number of impressions the tweet garnered, information about the targeted audience, who paid for the ad, and how much they paid. Here’s an example of how the information for a promoted tweet from Gillibrand is displayed: 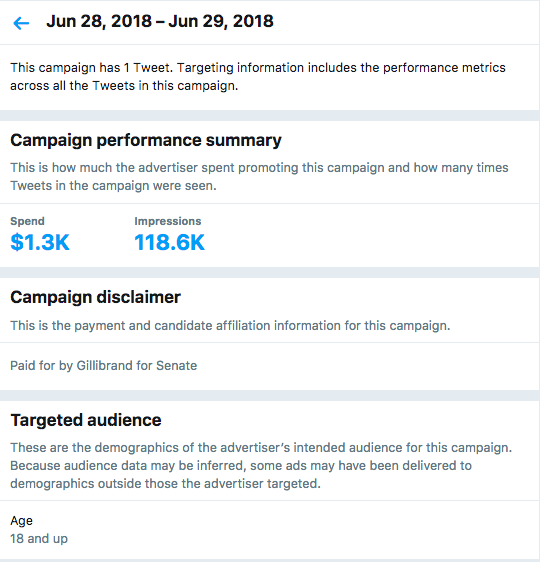 Unlike non-political ads, Twitter will keep an archive of U.S. political ads for an indefinite period of time. It’s worth noting that, for now, Twitter is only labeling ads dealing with federal elections. However, the company has committed to rolling out its own issue ads policy that will likely be similar to Facebook’s.

For both Facebook and Twitter, the biggest missed opportunity right now seems to be the disconnect between the information available in their database and that showing up on accounts and Pages running ads. The “info and ads” section on a Facebook page only shows active ads, while the political and issue ads database shows both active and inactive ads. Facebook should find a way to display the inactive ads on politicians’ Pages, at the very least, since the company has already flagged these ads, and they’re just in a separate database.

Additionally, neither Facebook nor Twitter seem to be interested in giving users a seamless way to navigate to their respective ad databases from their feeds. Twitter, for example, could add a button next to a promoted tweet, encouraging users to “see more Promoted Tweets from this account,” in order to alert more users to the existence of the database. Facebook and Twitter might be skittish about doing so — after all, the point of targeted advertising is to allow only a very specific group of people to see your ad.

These databases will be popular among journalists, who have the time and patience to comb through a large number of ads. But I don’t see the average user spending a lot of time in them — either because they don’t know the database exists or because they’ll lose patience once they see how many ads a single search can dig up.

So what are these ad transparency initiatives useful for? For starters, they ensure that the next time Twitter and Facebook are called before Congress, they can provide more accurate statistics about advertiser activity. The benefit (and drawback) for advertisers is that they can now easily view their competitors’ ads.

For the average user, I think the databases help demonstrate the sheer amount of advertising activity taking place on these platforms. But that’s about it — really, these new tools are just a place for Facebook and Twitter to dump a bunch of information that will keep them within Congress’ good graces.

As Mark Zuckerberg’s testimony in front of Congress demonstrated — there’s a lot the general public still doesn’t know about how ads on social media platforms operate, from whether Facebook or Twitter sell your data to advertisers to whether they are able to target ads to you by listening in on your microphone. And these tools likely won’t shed any light on those issues. Rather than bury political ads away in a separate database, I think actually encouraging users to visit them will help them understand advertising practices on these platforms better — and help them understand that no, Facebook isn’t serving you ads by eavesdropping on your conversations.