Baidu today unveiled a new chip for AI, joining the ranks of Google, Nvidia, Intel, and many other tech companies making processors especially for artificial intelligence.

Kunlun is made to handle AI models for edge computing on devices and in the cloud via datacenters. The Kunlun 818-300 model will be used for training AI, and the 818-100 for inference.

Baidu began working with field-programmable gate array (FPGA) chips especially designed for deep learning in 2011, the company said. Kunlun is about 30 times faster than the first FPGA chip from Baidu and is able to achieve 260 tera-operations per second (TOPS) and 512 GB/second memory bandwidth, a company spokesperson told VentureBeat in an email. No date has been set for release of the chip.

FPGA chips are also at the center of Microsoft’s Project Brainwave for fast AI processing in the cloud.

“With the rapid emergence of AI applications, dramatically increasing requirements are being imposed on computational power. Traditional chips limit how much computing power is available and thus how far we can accelerate AI technologies,” the company said in a statement. “Baidu developed this chip, specifically designed for large-scale AI workloads, as an answer to this demand.”

The announcement was made at the second annual Baidu Create AI developer conference in Beijing.

Apolong was developed with Chinese bus maker King Long and utilizes Baidu’s Apollo autonomous driving platform. The buses for commercial passengers will operate in Chinese cities like Beijing, Shenzhen, Pingtan, and Wuhan and in Tokyo in Japan. Roughly 100 Apolong buses have already been made, and they are scheduled to hit roads in early 2019. 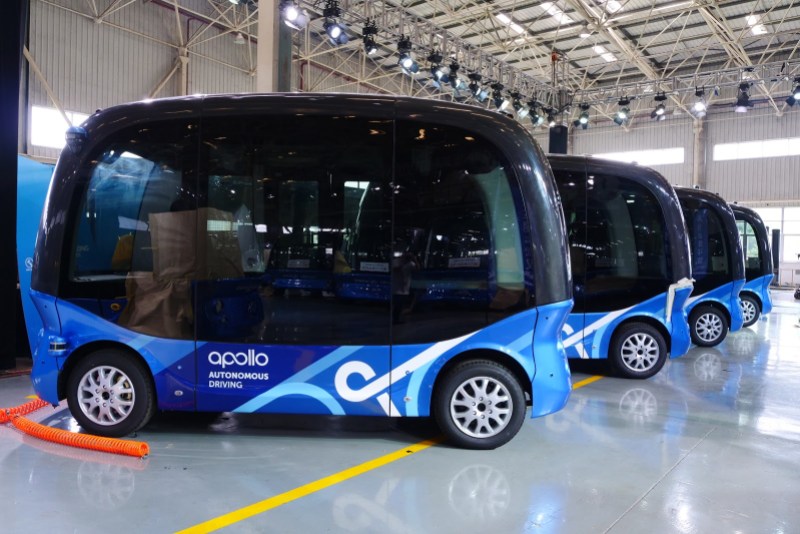 Baidu also announced an upgrade to its suite of AI services today, along with the release of Baidu Brain 3.0. The upgraded platform can supply simple drag-and-drop training of AI models, and it currently offers 110 AI services, ranging from computer vision to natural language processing to facial recognition software.

The Apollo autonomous driving platform, which has drawn support from more than 100 tech and transportation companies in the U.S. and China, will now partner with Intel’s Movidius.

Also announced at Baidu Create was Xeye, a camera powered by visual processing units from Movidius for retail customers.