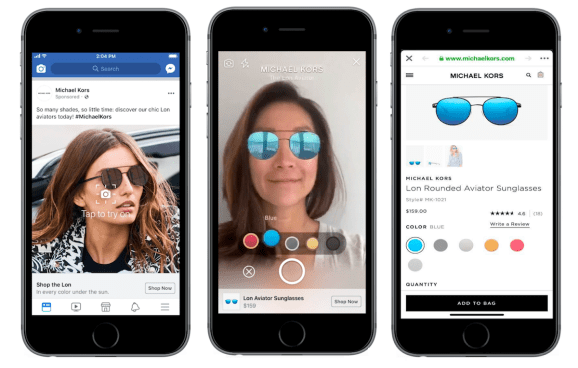 Facebook today announced that it is testing augmented reality ads in News Feed as part of a push to attract more advertisers to video ad innovations. Facebook exec Ty Ahmad-Taylor made the announcement at an event in New York to promote ways companies can advertise on Facebook during the holidays.

So far, Facebook has only tested AR ads with Michael Kors, and it’s only testing ads in the U.S. Michael Kors created an ad experience that lets users try on a pair of sunglasses using AR effects. The company will continue testing this summer with Sephora, NYX Professional Makeup, Bobbi Brown, Pottery Barn, Wayfair, and King. Ahmad-Taylor said Facebook also hopes to introduce AR ads to more industries over time — right now, it is only working with companies that have physical ads.

Wayfair marketing director Jess Jacobs also spoke at the event, which was attended by members of the press and Facebook advertisers. Jacobs said that augmented reality has been part of the company’s marketing strategy for months and that Wayfair sees AR as “a great way to move the customer through the funnel when she’s deciding between a few different things.” In September, Wayfair introduced an AR feature in its iOS app that allowed users to visualize how furniture looks in their home.

During last year’s F8 keynote, Facebook CEO Mark Zuckerberg said that the company’s goal was to make the camera the first augmented reality platform. During this year’s conference, Facebook announced that it was working with companies like ASUS, Nike, Sephora, and Kia to create AR experiences in Messenger. A Facebook spokesperson shared more details today about what kind of traction these experiences have gotten. The company said that ASUS, for example, saw over 10 times more engagement with its “experiences” in Messenger that contained AR than those without.

Facebook will need to continue to share engagement metrics to get more advertisers onboard with AR ads. An April 2018 survey of more than 55 marketing executives conducted by Boston Consulting Group found that businesses hold back on AR advertising out of concern that it won’t allow them to reach their audience at scale, and because the ROI is still unknown.

Lastly, Facebook is rolling out a kit of video creation tools in Ads Manager. The goal is to encourage businesses to “use existing assets to build videos that are optimized for mobile,” Ahmad-Taylor said. The company cited several Facebook-commissioned studies during the event, including a survey of 335 “mobile-first” shoppers in the U.S., which found that 1 in 3 believe video is the best medium for discovering new products.