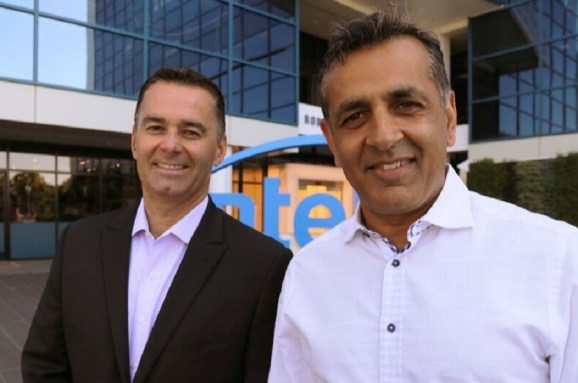 Dan McNamara of Intel and Ronnie Vasishta of eASIC.

Intel doesn’t have a permanent CEO right now, but that isn’t stopping it from doing deals. The world’s biggest chip maker announced today that it has acquired eASIC, a designer of programmable chips that can be customized at the time of production.

eASIC, founded in 1999, will add to Intel’s programmable chip business, which it acquired when, under then-CEO Brian Krzanich, it bought Altera for $16.7 billion. eASIC has 120 employees.

Dan McNamara, corporate vice president and general manager of the programmable solutions division at Intel, said that Intel is competing to win in the largest-ever addressable market for silicon, which is being driven by the explosion of data and the need to process, analyze, store, and share it.

“This is a really strategic play for us,” McNamara said in our interview. “This is a continuation of the broader data-centric focus at Intel.”

The company is already the largest maker of processors, and it wants to extend that leadership to areas such as chips that handle functions such as memory; modems; purpose-built custom chips known as ASICs; vision processing units (VPUs); and field programmable gate arrays (FPGAs). The latter are made by the former Altera division, which is now part of Intel.

In the past couple of years, FPGAs have been gaining in their adoption in data center applications.

FPGAs are growing due to their versatility and real-time performance. These devices can be programmed anytime – even after the chips have been shipped to customers. FPGAs contain a mixture of logic, memory, and digital signal processing blocks that can implement any desired function, with extremely high throughput and very low latency.

This makes FPGAs ideal for many critical cloud and edge applications, and Intel’s Programmable Solutions Group revenue has grown by double digits as customers use FPGAs to accelerate artificial intelligence, among other applications, McNamara said.

“We are in a massive adoption phase now with three areas of acceleration,” he said.

“It’s an exciting time for FPGAs,” he said.

At the same time, there’s a trade-off. FPGAs are flexible, but they can be expensive. Once a new application is understood and stops changing, then the time comes to replace the FPGA with something less flexible.

Santa Clara, California-based eASIC makes structured ASICs, or application-specific integrated circuits. FPGA customers often design their chips for high-performance, low-power applications in wireless, networking, and the Internet of Things markets. They start with flexible chips that can be fashioned for products that are being rushed out the door. Then they are migrated to devices called “structured ASICs,” which can be used to improve performance and power efficiency. Lastly, once the design is solidified and the product moves into high-volume production, the chip can be shifted to full ASICs, or hardwired custom chips with standard components.

“The eASIC team has developed and deployed a truly innovative structured ASIC product,” said Ronnie Vasishta, CEO of eASIC, in a statement. “The marriage of the eASIC technology with IP and capabilities of Intel will allow the ubiquitous deployment of this proven structured ASIC product into a wide breadth of exciting end applications and markets. This is the perfect time to usher in this new chapter for eASIC.”

McNamara said that eASIC has created the software to transform FPGAs into structured ASICs, and it has been doing so for 19 years with a seasoned team. It has done so for the former Altera’s FPGAs, as well as FPGAs from rival Xilinx.

“They have all the tools to handle the transition,” he said.

McNamara said the products could be useful in market segments like 4G and 5G wireless, networking, and IoT. Over time, Intel could also use eASIC in products that combine multiple chips in a single package. McNamara said that Intel can devote more sales, marketing, and engineering resources to eASIC’s team and accelerate their plans for growth.

The acquisition will be complete in the third quarter, pending various conditions. Intel’s former CEO Krzanich resigned on June 21 over a violation of company policy on relationships with staffers. Robert Swan, Intel’s former chief financial officer, is now interim CEO.