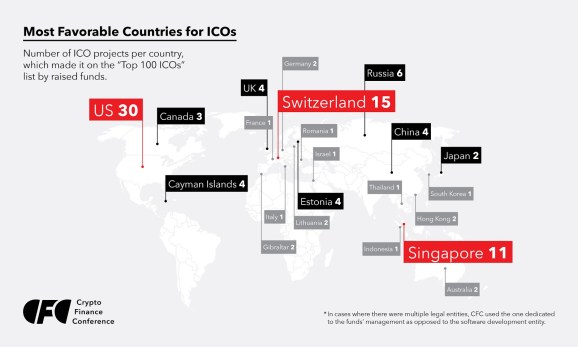 As initial coin offerings continue to explode, a new study found that the U.S. has become the leading territory for such deals, despite a murky regulatory picture.

According to a report released today by the Crypto Finance Conference, 30 of the 100 largest ICOs were held by companies based in the U.S. Switzerland was home to 15, followed by Singapore with 11.

“ICOs continue to gain momentum. They raised $6.3 billion in the first quarter of 2018 — more than was raised in all of 2017,” Andrea-Franco Stöhr, CEO of CFC, said in a statement. “This research is a great resource for the next generation of projects. It helps us understand which countries are embracing blockchain and crypto, and how.”

The study also noted that a number of countries are working hard to put in place regulations that would encourage more ICOs. These include Estonia, which was home to four of the top 100 ICOs, and Russia, which had six.