Google has announced a new Chromebook loaner program for businesses that’s designed to get workers up and running with a temporary new machine within minutes.

The Chrome Enterprise Grab and Go initiative is actually an extension of a program Google operates in-house, with thousands of its employees around the world notching up “100,000 loans” over the past year, according to Google IT operations manager Russ White.

You may recall that last year Google launched a new Chrome Enterprise service — a $50-per-device annual subscription that leverages Chrome OS and the Chrome browser and gives IT administrators a cloud-based console for handling fleets of Chromebooks. It promises virtualized desktop applications, theft-prevention tools, and a bunch more security-focused features.

While the Chrome Enterprise setup is designed to encourage companies to sign up to Google’s gargantuan software and hardware ecosystem, it also lends itself well to machine-swapping. Employees don’t have to always use the same laptops because all their work is stored in the cloud, which they access via a single login, and they can continue seamlessly with what they were doing regardless of what machine they have. That includes retaining their own passwords, bookmarks, browsing histories, and other settings.

The general idea is this: Companies can lay out a rack of fully charged Chromebooks that are always available, and employees can just pick one up and log in and they’re good to go. 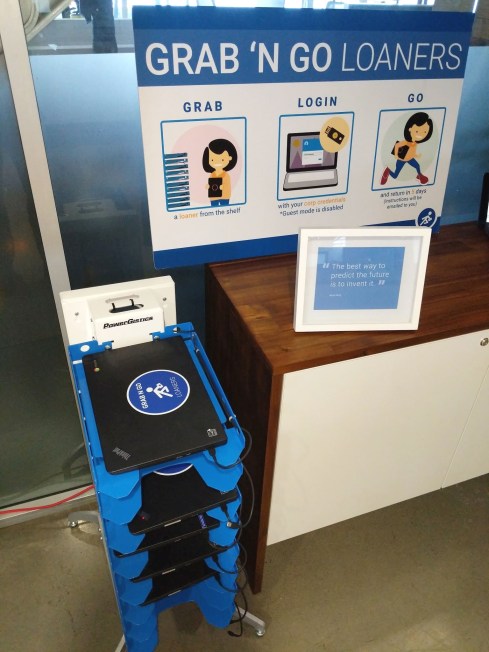 Above: Google’s Grab and Go

In reality, most company employees will likely have their own machines, but there are various circumstances in which the Grab and Go program would be useful. For example, if a worker’s machine is broken, lost, or stolen, they can get set up immediately on a new machine with all their settings and documents intact. Or workers who frequently travel between offices may require ad-hoc access to a temporary machine.

This setup can also help technical teams within companies manage their workload — they don’t have to fix a worker’s machine on the spot; they can just issue a loaner Chromebook and deal with the repair in their own time.

“When an employee’s device is not working, the impact goes beyond the cost of replacement,” White said. “There are the hours employees devote to troubleshooting devices instead of completing projects. Then there’s the time your IT team spends on repair and replacement when they could be focusing on more strategic initiatives.”

It’s worth noting here that Google won’t actually be supplying the Chromebooks or charging racks. What Google is providing is the source code derived from its own internal loaner management suite, which it is making available via GitHub.

This is the software that will power the loaner service, and it includes automated emails when an employee signs in, telling them when to return their device or how to extend the loan if required. It also features status-tracking functionality, whereby the Chromebook sends a constant signal back to the IT admin, who can track its usage. If the device isn’t sending a signal and hasn’t been returned, it could be time to prompt the user to return it. Ultimately, this is all about optimizing capacity to ensure that the Chromebook charging rack has enough machines and nobody has a loan unit sitting needlessly on their desk overnight.

Through this self-serve system, companies are effectively taking Google’s learnings and building their own in-house loaner system. But Google said that it will also work with third-party providers, who will be able to sell companies an entire loaner bundle that works right out of the box — with Chromebooks, charging racks, and ready-to-deploy software.

Although any business can already take the code and set up their own loaner programs, Google is also opening an early access program to help companies get set up more quickly — including offering advice and guidance through the initial setup process.