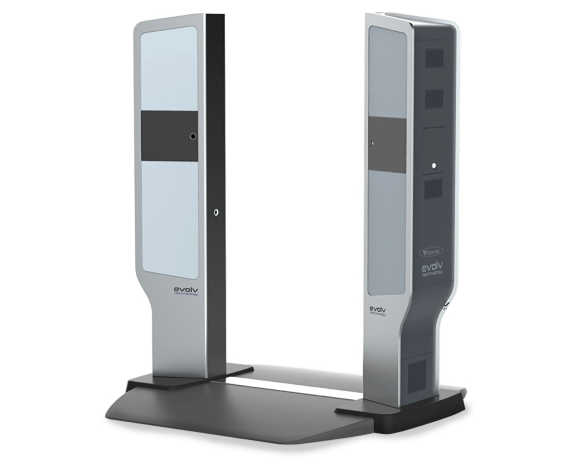 A 3D render of an Evolv Edge scanner.

One of the worst things about flying is the inevitable wade through airport security. Average wait times at congested airports like Salt Lake City International and Washington Dulles regularly exceed half an hour, and that’s assuming the people in front of you remember to take their shoes off and put their electronics in separate bins.

Engineers at Evolv, a Waltham, Massachusetts-based security startup specializing in affordable screening technologies, think they have a better solution. They call it the Evolv Edge, a five-foot security gate that uses machine learning algorithms, a facial recognition system, and a proprietary millimeter wave sensor to expedite security screenings.

The company today announced that Evolv Edge scanners will be deployed in Oakland International Airport (OAK) to streamline its employee screening program. (OAK was selected by the Transportation Security Administration earlier this year as a TSA Innovation Site, a distinction that allows it to test technologies that improve efficiency.)

“With today’s threat landscape, the security perimeter has expanded beyond traditional checkpoints,” Mike Ellenbogen, CEO of Evolv Technology, said. “Evolv Edge’s flexibility and portability provides Oakland International Airport with an added layer of security when it comes to employee screening. Oakland International Airport is always at the forefront of innovation, and we will continue working closely with their team to ensure success and safety.”

The Evolv Edge can scan up to 600 people per hour, the company claims, compared to the 250 of which most conventional body scanners are capable. That’s because you walk right through it — it doesn’t require you to slow down, pose, or take off your jackets or shoes, and its algorithms can distinguish in real time between common objects like cellphones and keys and potentially dangerous ones like firearms and explosives.

“If you’re going through security every day [like these airport employees], you have to do it in a more effective way,” Chris McLaughlin, vice president of global solutions at Evolv, told VentureBeat in a phone interview. “[These] venues are in need of a new generation technology that screens in the speed of light.”

Evolv aspires to more than just airport security. In August 2017, it teamed up with the Los Angeles County Metropolitan Transportation Authority to deploy the Evolv Edge in commuter train stations, and in May it tested scanners at the World Trade Center PATH station in New York City. It says it’s working with a range of clients it isn’t willing to name just yet, including entertainment and sports stadiums, travel and transportation hubs, and other commercial facilities.

What remains unclear, though, is how Evolv Edge’s threat detection rates compare to traditional checkpoints. A leaked 2015 TSA report revealed that Department of Homeland Security investigators managed to sneak weapons and fake bombs past airport screeners in an alarming 95 percent of attempts.

Evolv hasn’t made public the results of its pilot programs, but McLaughlin said that it’s committed to a policy of transparency. “[Evolv Edge] is based on an open architecture,” he said. “We’re maintaining close oversight with engineers and scientists […] to validate [our] screening models.”

The scanners start at $60,000, with an annual subscription that covers over-the-air software updates and ongoing maintenance.

Since its founding in 2013, Evolv has raised $18 million from General Catalyst, Lux Capital, Gates Ventures, and Data Collective. Its board includes the former head of the Secret Service, former CTO of the TSA, a former White House National Security Advisor, and former head of counter-terrorism for the New York Police Department.