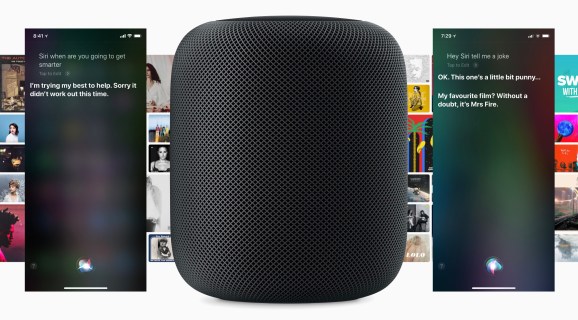 A private beta version of the Apple HomePod operating system adds new capabilities to the speaker’s highly limited Siri digital assistant, according to French Apple blog iGeneration. The new features are aimed at addressing some of HomePod’s most glaring omissions, as well as reducing its feature gap with Amazon Echo and Google Home speakers.

Perhaps the most noteworthy addition is telephone calling ability, which finally enables Siri to make and answer calls directly from the HomePod. Users currently must initiate calls on another device, such as an iPhone, and then manually transfer them to HomePod. With the new software, a user will be able to redial numbers, search call history, hear voicemail, and call for emergency services. Find My iPhone and iPad support will also be offered directly from the speaker to help users locate their lost devices.

Additionally, Siri will be able to set and maintain multiple timers, a feature offered by kitchen-friendly rivals that lets users track the progress of several different items as they’re cooking. The report also says that Siri will become more “cultured” by adding information on food, nutrition, and famous individuals, as well as the ability to search for songs based on the user’s memory of lyrics.

While some of the features will be specific to the English language, others will be multilingual, and currently English-only features such as calendar management will be supported in additional languages. Spanish support is being added to enable HomePod to become viable in Spain and Latin American countries. Siri will also gain the iOS 12-vintage ability to translate certain content from one language to another.

The private HomePod beta is said to be in testing by Apple corporate and select retail employees, with no known plan for a broad release in public beta form. iOS 12 is on track for an official rollout in September of this year for iPhones, iPads, and iPod touches, so the HomePod version is likely to debut around the same time — assuming that its bugs are addressed by Apple’s internal beta testers.

Apple announced last week that it will offer users the opportunity to chat online with “HomePod specialists” on July 25, posting questions to get live help. Though HomePod users certainly want to know how and when Siri will improve, it’s unclear whether Apple will use the online chat to preview the upcoming improvements, or just talk about the speaker’s already-known features.