Spotify today released its second earnings report as a public company, disclosing results that were largely in line with expectations for a company seeking to fend off the growing challenge posed by Apple Music.

The Swedish streaming music service said it now has 83 million paid subscribers, up from 75 million the previous quarter, and about what analysts had projected. Expectations can still be a little tricky, as the company put off some Wall Street analysts by choosing a direct stock listing earlier this year in place of a traditional IPO.

Back in May, Apple reported that it had 50 million users via “paid subscriptions and free trials.” Observers estimate that the free trial number is typically around 8 million, so the number of paid subscribers is probably closer to 42 million. That means Apple Music has been adding on average 2 million new paid users each month since the start of 2018.

If so, Spotify may be just keeping ahead of that pace by adding 8 million paid users in three months. But thanks to the growing popularity of Spotify’s family plan and its new bundle with Hulu’s video streaming service, not all of those new subscribers are necessarily paying the full $9.99 monthly rate.

The company overall reported 180 million monthly active users, up 30 percent year over year, a number that also slightly beat the 178.5 million MAUs projected by a Bloomberg survey of analysts. Spotify said growth in regions such as Latin America is driving that MAU increase. 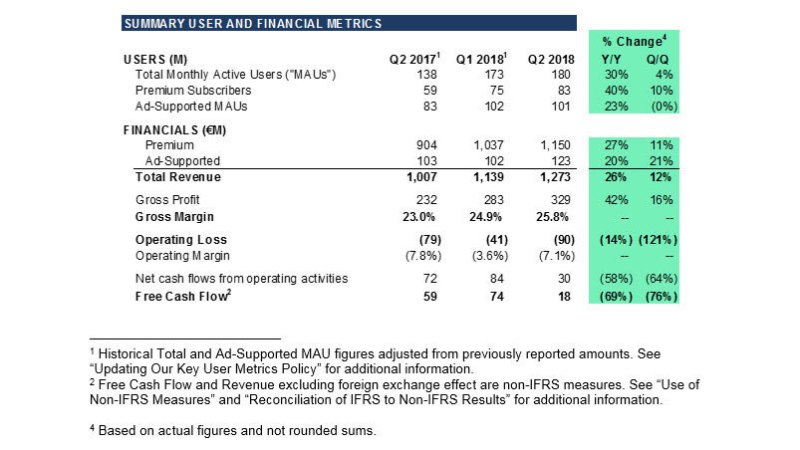 Spotify reported that its profits took a bit of a hit this quarter, primarily because its stock — which is up 40 percent since it started trading — has been doing better than expected, creating higher-than-expected options expenses.

The company added that revenue increased 26 percent from the same period one year ago.

Some interesting notes for investors looking ahead: The company projects that in the third quarter it will have between 85 million and 88 million paid subscribers, a slower pace of growth than it has seen so far this year. But Spotify also slightly increased its year-end estimate for total paid subscribers, from a range of 92 million to 97 million previously to a new estimate of 93 million to 97 million.