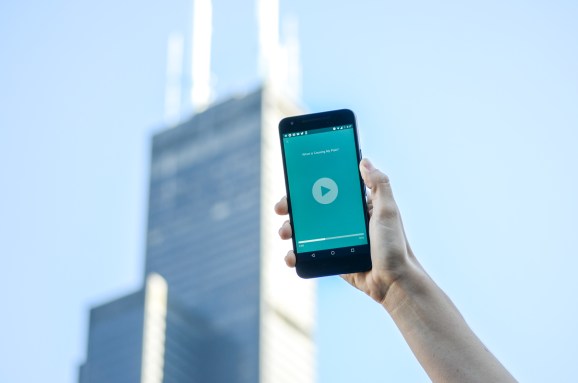 Chronic pain has reached epidemic proportions in the U.S. Nearly 25.3 million adults experience pain every day lasting for more than three months, according to a recent meta-analysis by the National Health Institute Survey (NHIS), and they’re significantly more likely as a result to have worse overall health, suffer from more disabilities, and require more medical resources. Making matters worse, chronic pain remains poorly understood and difficult to manage — even prescription painkillers only help about 58 percent of people with long-lasting pain, according to the American Academy of Pain Medicine.

But the sobering statistics didn’t dissuade John Gribbin and two longtime partners from founding Curable, a Chicago-based startup that seeks to cure — or at the very least mitigate — chronic pain.

“Our mission is to provide access to evidence-based, safe, and effective treatment for chronic pain,” Gribbin said.

One of the most debilitating things about chronic pain, he told VentureBeat in a phone interview, is its tendency to “rewire the brain” to exacerbate the feeling of pain — a phenomenon he experienced personally for 15 years. It’s known as neurological sensitization, and it occurs when the central nervous system becomes sensitized by severe tissue damage or inflammation.

“The reason that chronic pain has a different definition [than acute pain] is because the body is designed to have healed [in three to six months],” he explained. “If the pain is lingering beyond that timeframe, it implies that [the nervous system] is much more involved in the pain.”

Curable’s product, an app for Android, iOS, and the web, leverages a combination of pain science education and evidence-based techniques to address chronic pain holistically.

It offers hundreds of unique audio, visual, and text exercises — including meditations, controlled breathing techniques, and journaling — tailored to treat different types of chronic pain and curated by Clara, Curable’s digital avatar. The assistant guides users through each experience, offering words of encouragement and advice on which activities to try (or reattempt) next. The first few are free; the rest require a monthly ($12.99 per month) or annual subscription plan. 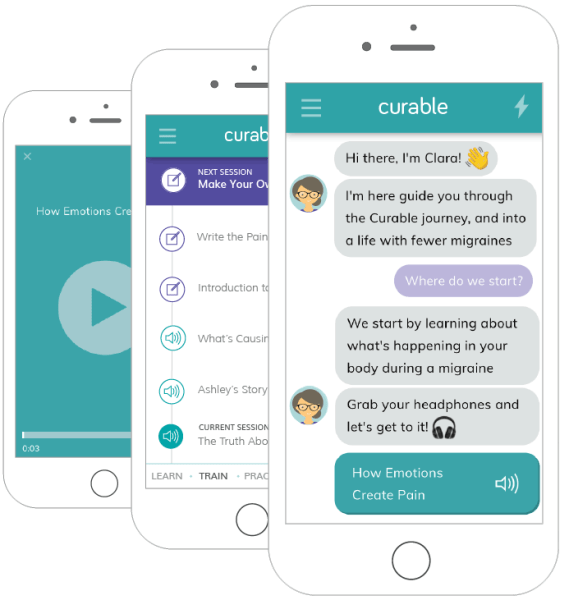 “Clara begins a dialog with users,” Gribbin said. “It learns more about them and more about their pain through a series of questions and puts together a program specific to the needs of the user … What the user experiences is a conversation with a virtual coach.”

Each of the exercises, which were developed in conjunction with physicians and chronic pain researchers, take about 10-20 minutes. Gribbin said that users typically see the best results when they complete them at least 2 – 3 times per week for the first couple of weeks.

It’s what Gibbons calls a “biopsychosocial” approach to pain relief: retraining the brain to reverse the cycle of pain.

“There’s a mountain of neuroscience and pain research telling us that the brain plays a big role in chronic pain, and for most people, a critical piece of their healing is altogether missing. That’s the piece that involves therapeutic attention,” he said.

The proof is in the pudding — or rather, the testimonials. Seventy percent of Curable users report experiencing “some degree” of relief from physical symptoms after 30 days of using the app, and 30 percent of people say they experience improved quality of life.

Curable makes no claims it can cure, or even treat, chronic pain, but it’s in good company with its cognitive behavioral therapy (CBT) approach. The Mayo Clinic offers a multidisciplinary pain program, and a 2011 study showed that three years after receiving a form of CBT known as acceptance and commitment therapy — which focuses on becoming more aware, focused, and engaged in specific goals — 65 percent of subjects had measurably improved clinical outcomes.

“We didn’t make this stuff up. It’s not hippy dippy new-age therapy,” Gribbin said. “It’s pretty well-grounded in science, and a lot of doctors and health care professionals are excited about it.”

Curable has managed to generate quite a bit of buzz. Gribbin wouldn’t reveal exact figures, but says that its customer base has grown 20 to 50 percent a month each month this year. A good chunk of the growth has come from word of mouth, but the startup also has formal arrangements with over 100 hospitals and clinics, and it’s close to finalizing a deal that will put it in 3,000 hospitals and clinics.