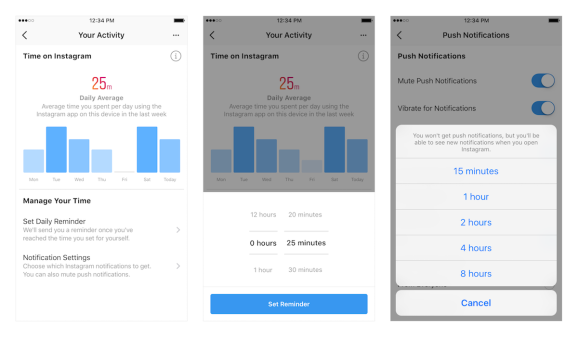 Instagram and Facebook are encouraging users to think more carefully about how much time they’re spending on their apps with the launch of new activity-tracking tools.

Today, Facebook announced that it is adding “activity dashboards” to the main Facebook app, and to Facebook-owned Instagram. The company said these dashboards are “coming soon,” but didn’t provide an exact date.

On both apps, the new dashboards will live within the settings tab — on Instagram, it will be called “Your Activity,” and on Facebook, “Your Time on Facebook.” There, users can see the average amount of time they spent on the app that week, as well as how much time they spent that day. They can opt to receive a reminder after they’ve been on Facebook or Instagram for a certain amount of time — say 45 minutes — to encourage them to log off for the day. They’ll also be able to mute push notifications for a set amount of time.

By adding activity dashboards, Facebook and Instagram are really just keeping up with the times. Both Android P and iOS 12 will come with enhanced “Do Not Disturb” and “Time Well Spent” features, where users can view how much time they’re spending on certain apps. So Facebook and Instagram might as well encourage users to check the amount of time spent within their apps, rather than going to the Android or iOS dashboards.

Placing these dashboards within the settings tab — instead of in the main News Feed — will likely cut down on the number of users who actually use the tools. Additionally, it appears that the onus is on the user to determine what they want to set as their daily limit. The tool would be more powerful if it encouraged users to set a specific daily limit or showed them which parts of the app they spend the most time in and sent suggestions about where to cut back. But while that would be good for the company’s “Time Well Spent” initiative, it wouldn’t help ad revenue, which depends on having more eyeballs in more parts of the app.

Other tools the company has added this year to help users feel like the amount of time they’re spending on social media is healthy include a “Keyword Snooze” on Facebook that lets you hide certain words from your News Feed for 30 days and a “You’re all Caught Up” feature on the Instagram News Feed to alert you when you’ve scrolled through all the posts that have been added since you last opened the app.