Chinese technology titan Alibaba has announced a deep partnership with Starbucks, which it says will “transform the coffee industry in China.” To do so, the duo will merge the online and offline worlds and leverage big data to hook consumers into the Starbucks and Alibaba ecosystems.

Alibaba has evolved far beyond its initial roots as an online marketplace that connects Chinese manufacturers and exporters with businesses around the world. It now operates across the online retail spectrum, with properties to rival Amazon’s stakes in ecommerce and cloud computing, and it is heavily invested in artificial intelligence, mobile payments, social networks, video-streaming, and more.

Put simply, Alibaba has its fingers in a lot of proverbial pies.

As we’ve seen with technology giants such as Amazon, Alibaba has been going all out to own the entire retail experience, bridging the divide between offline and online and controlling all the processes involved in a transaction, from purchase and payments through to logistics and delivery. And it’s this gargantuan technological infrastructure that will power its new partnership with Starbucks.

Kicking off this coming September, Starbucks will begin piloting a delivery service through Alibaba’s food delivery app, Ele.me, which Alibaba acquired for around $9.5 billion earlier this year. The delivery service will initially be limited to 150 stores in Beijing and Shanghai, with plans to expand it to thousands of Starbucks stores around the country by the end of the year. But this partnership involves more than simply adding Starbucks to Ele.me’s existing roster of food and drink outlets — Ele.me will have dedicated Starbucks drivers. 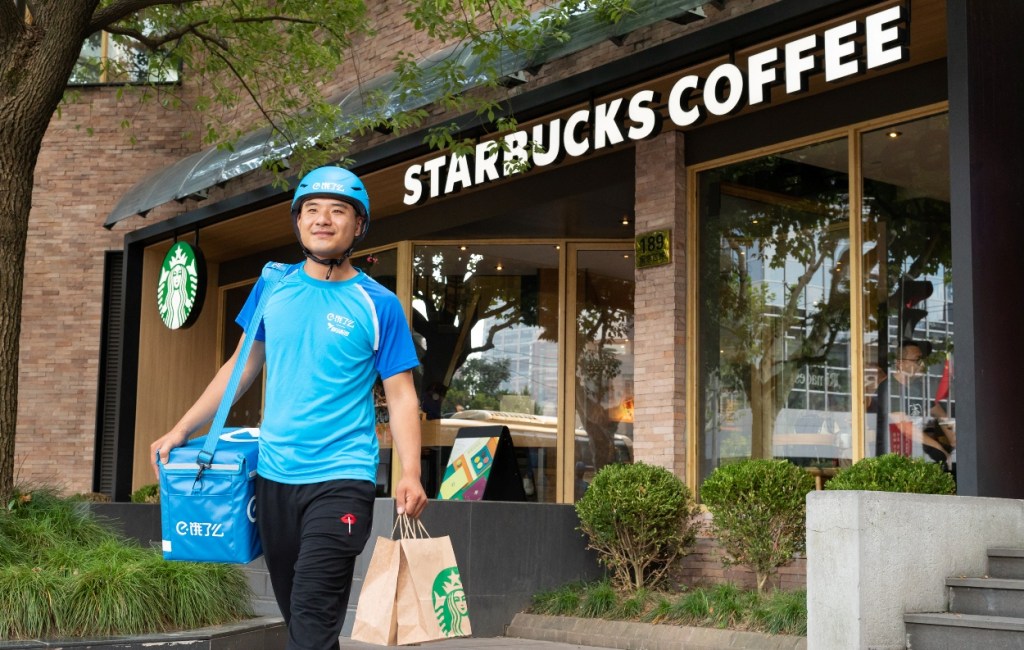 Above: Starbucks and Alibaba’s Ele.me

Last year, Alibaba opened a bunch of new cashless Hema supermarkets, following an investment it made in the company the year before. These futuristic outlets allow customers to shop in-store or online and are powered by Alibaba’s technological infrastructure. Part of this setup involves mining big data — all purchases and payments are tracked digitally — to build up a profile of consumer preferences and make corresponding recommendations and offers. Moving forward, these stores will also now serve as home to “Starbucks delivery kitchens,” which will tap Hema’s fulfillment technology and open up deliveries beyond Starbucks’ stores. However, this is more than enabling Starbucks to broaden its potential delivery market — it will also leverage Hema’s “consumer insights” to “further penetrate and better serve” consumers.

It could also help Starbucks determine where demand for its coffee is highest and inform future decisions about where to open new brick-and-mortar stores.

This all builds on an existing partnership between the two companies, which teamed up for an online store initiative back in 2015 and launched a physical high-tech store in Shanghai last year based around augmented reality. As a result of these latest integrations, however, Starbucks is poised to substantially boost its footprint in China.

“Through our partnership with Alibaba, we are breaking the physical and virtual barriers between the home, office, in-store, and digital space, making China the first Starbucks market to deliver a seamless Starbucks Experience across all facets of our customers’ lives and further reflecting the uniqueness and strategic importance of the market,” said Starbucks China CEO Belinda Wong, in a statement.

Tying together these various offline and online strands is what the coffee giant refers to as a “virtual Starbucks store,” which will effectively be an online hub where consumers can access a “personalized Starbucks digital experience” that will include a loyalty program and a centralized platform where they can order coffee, buy merchandise, or gift a coffee to a friend.

For Starbucks, partnering with a major technology company such as Alibaba is a no-brainer in terms of achieving greater scale across China. This is especially true as the coffee chain’s dominance in China has been under threat from rivals who have accused Starbucks of anti-competitive practices. For Alibaba, this move represents part of a broader push — which it calls “new retail” — to transform commerce across the country. This effort goes beyond launching its own futuristic offline-online stores or partnering with global conglomerates, as Alibaba has also been teaming up with smaller “mom and pop” stores to get them online and hooked into its ecosystem.

Nabbing Starbucks, however, will go some way toward helping Alibaba own retail in China.

“Starbucks is growing and innovating faster in China than anywhere else in the world,” added Starbucks CEO and president Kevin Johnson. “Our transformational partnership with Alibaba will reshape modern retail and represents a significant milestone in our efforts to exceed the expectations of Chinese consumers.”