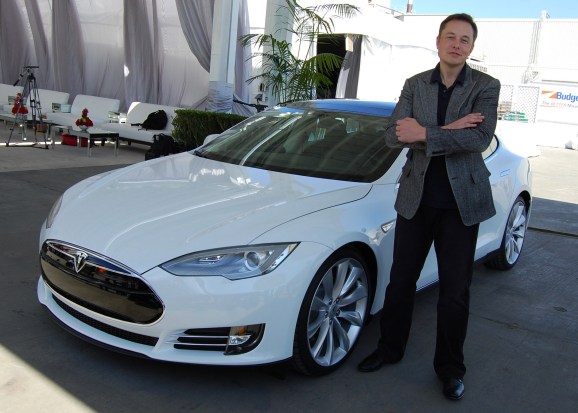 (Reuters) — Chief Executive Elon Musk said on Twitter he is considering taking Tesla Inc private in what would be the largest deal of its type, moving the electric car maker out of the glare of Wall Street as it goes through a period of rapid growth under tight financial constraints.

“Am considering taking Tesla private at $420. Funding secured,” Musk said on Twitter. At $420 per share, a deal would be worth $72 billion overall. Musk did not disclose the source of the funding.

Tesla did not immediately respond to a request for confirmation or clarification. Its shares jumped more than 7 percent to $367.25 before being halted for news pending.

When another person tweeted that going private “saves a lot of headaches,” Musk replied, “Yes”. Asked whether he would continue to be CEO under such a scenario, Musk replied there would be “no change.”

Musk has been under intense pressure this year to prove he can deliver on his promise to turn his money-losing company into a profitable higher-volume manufacturer, a goal that has propped up Tesla shares and resulted in a market value higher than that of General Motors Co.

Going private is one way to avoid the intense scrutiny of public markets. Musk has had feuds with regulators, critics and reporters, and questions remain about Tesla’s production and manufacturing difficulties, long-term demand for its cars and uncertainty over funding.

Musk owns nearly 20 percent of the company. A price of $420 per share price would represent a 22.8 percent premium to Tesla’s closing price on Monday, which gave the company a market value of about $58 billion.

“Our guess is there is a one-in-three chance he can actually pull this off and bring Tesla private,” Munster said. “The 16 percent premium to the current share price may not be high enough to incentivize existing shareholders to support the sale.”

Musk tweeted that he hoped all current investors would remain were the company to go private.

“Would create special purpose fund enabling anyone to stay with Tesla. Already do this with Fidelity’s SpaceX investment,” Musk tweeted, referring to the private space launch company Musk also runs.

Despite the unconventional method of disclosing such information, analysts took Musk at his word.

“I believe Tesla considers Tweets as public disclosure. I think he’s serious. Plus this is short squeeze rocket fuel after a nice quarter,” said analyst Chaim Siegel from Elazar Advisors.

A short squeeze is a trading scenario that occurs from time to time in heavily shorted stocks, when bearish traders are forced to buy shares to avoid big losses – something that ends up pushing the stock only higher.

Short interest in Tesla on Tuesday stood at nearly $13 billion, according to S3 Partners, a financial analytics firm.

“I can’t believe this is something to bluff or make fun of,” said George Galliers of Evercore ISI. “Given his historic frustration with short sellers, analysts and certain parts of the press, it is perhaps also not surprising that he has given consideration to taking the company private.”

Earlier on Tuesday, a source familiar with the matter said Saudi Arabia’s sovereign wealth fund, Public Investment Fund, had bought a minority stake of just below 5 percent in Tesla. The Financial Times earlier reported the investment.