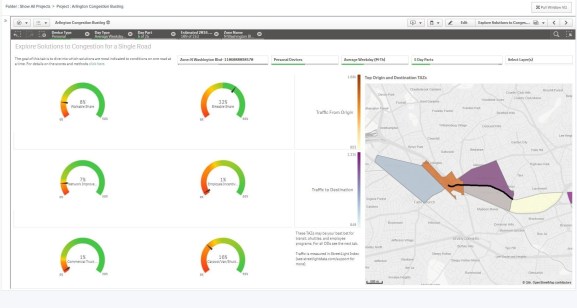 Americans spend an estimated 14.5 million hours each day stuck in traffic, and all that congestion affects more than just their nerves. Taking into account factors like lost productivity, the increased expense of transporting goods, and wasted fuel, gridlock costs U.S. drivers about $305 billion a year.

It’s just one of the problems StreetLight Data, an eight-year-old San Francisco-based traffic analytics company, aims to solve through software that collates location data from roughly 70 million devices in the U.S. and Canada. The company today announced a $10 million funding round with participation from Osage University Partners, ENGIE New Ventures, Deutsche Telekom Capital Partners, and other undisclosed investors, which it’ll use to “invest in new product innovations” and “accelerate … expansion.”

“We’ve seen the adoption of StreetLight InSight accelerate over the past two years. The transportation industry has turned the corner in accepting big data solutions for basic planning support,” StreetLight Data CEO Laura Schewel said in a statement. “What’s more exciting is seeing our leading clients changing their core practices due to the availability of nearly infinite analytics from StreetLight InSight. This kind of data-driven transformation is not a luxury — it’s a requirement to manage the ever-increasing complexity, risks, and rewards of our fast-changing transportation and city systems.”

StreetLight Data sources information from third-party smartphone weather apps, dating apps, and other apps with location components (about 300 in all), delivering a nearly real-time look at about 20 percent of a region’s traffic. (That data is anonymized to protect users’ privacy — StreetLight Data only sees a randomized device number.) Agencies with sensor networks augment its database with their own measurements.

It then applies sophisticated algorithms to determine things like the percentage of travelers commuting from one city to another, those travelers’ final destinations, and even the highway onramps they’re most likely to use. Urban planners and civil engineers use the insights to study not only troublesome traffic patterns, but climate-changing emissions from transportation, the impact of new modes of transportation on communities, and infrastructure investment.

“You can ask the data questions, such as ‘What percentage of people driving on Broad Street [are] heading to the West End, Scott’s Addition, or downtown?’ or ‘On what road are most car trips under 3 miles?'” Schewel told the Richmond Times-Dispatch in a December 2017 interview. “This kind of information used to take months of survey work. Now, you can get an answer in three minutes.”

StreetLight Data operates on a software-as-a-service (SaaS) model — states pay monthly for access to its web-based analytics dashboard. Virginia, Minnesota, Ohio, and New York City are among its customers.

StreetLight Data has raised more than $25 million to date, but it has its sights set on expansion. In June, it launched the Multimodal Measurement Initiative, a working group of public agencies, academic institutions, and private transportation firms that seek to “measure the way all modes of travel interact” — including bikes, public transportation, pedestrians, cars, trucks, delivery vehicles, and on-demand rideshare services.

“As new transportation trends converge — from car-sharing, autonomous vehicles, and electric cars to the energy transformation of massive amounts of distributed renewables with variable production on the grid — the global need for data-driven infrastructure planning has become more critical than ever,” Scott Pinizotto, ENGIE investment director and StreetLight Data board member, said. “StreetLight Data is building a tool to support a sustainable approach to these rapidly evolving, ever-more interdependent systems.”