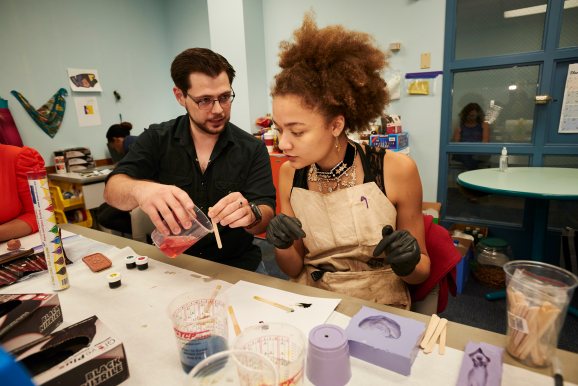 Many U.S. cities are wrestling with how to build a healthy “pipeline” of tech talent. But too often those solutions are limited to the addition of new STEM degrees at traditional higher education institutions or coding classes in local K-12 schools.

In Pittsburgh, local seed stage investor Innovation Works is interested in another issue: how to get teens involved with the local hardware sector. So in conjunction with its hardware accelerator, AlphaLab Gear, Innovation Works launched Startable Pittsburgh a few years back. It’s a free eight-week program that teaches Pittsburgh teens the engineering, fabrication, and business skills needed to build and sell a product at scale. It‘s now in its fourth year, and about 115 teens have completed the program to date.

Startable program associate Staci Offutt told VentureBeat in a phone interview that the main goal of the program is to introduce teens to maker spaces. Students may be interested in hardware and startups, but they’re too intimidated to walk into AlphaLab Gear and see how they can get involved. And the expensive equipment might make them feel like working in hardware and tech is out of reach. Or they don’t see how skills like laser-cutting, 3D printing, welding, and computer-aided design are applicable to their interests.

“It gets these students access to spaces like ours — it lets them know that we’re here, that accelerators exist, that there is a path for entrepreneurs, and this is one of them,” Offutt said.

The tracks offered by the program vary depending upon what the students that year are interested in. This year, the program includes fashion and music tracks, while the previous year students were able to choose from metal working, woodworking, and textile tracks. The program follows the trajectory of a typical accelerator program — first students learn how to use various equipment in the space, and then they come up with an idea for a product and a business plan and get to work building their prototype. At the end of the program, students sell their products in a pop-up market and compete in a pitch competition, where they have a chance to win $1,000 for their business.

Offutt said that over the years Startable has identified two main challenges: how to ensure students still have access to the necessary equipment at home and how to keep students engaged with Pittsburgh’s tech community after they graduate from the program. The first part is easier to accomplish for some of the student’s projects than others — Offutt said that this year students on the fashion track each received a sewing machine, as well as a transportable stand so that they could easily take it with them on the bus home.

In order to give the students more opportunities to work with Pittsburgh’s tech community, Startable makes internships available with some of AlphaLab Gear’s startups. Graduates also have the option to serve as instructors for the following year’s program. Offutt said that about 25 alumni have continued to work with Startable in some form. But the real test of how effective the program is will be based on how many students start their own company, or work for Pittsburgh’s startups outside of Startable.

Tyra Robinson, 19, went through the Startable program two years ago in the summer before heading off to college. Now a chemical engineering major at Columbia University, she said she wanted to explore whether working at startups was for her.

“Chemical engineers can basically work in any industry, but at the same time, it makes it even harder for me to choose what I want to do after college. And Startable just seemed like a good opportunity for me to help figure that out,” Robinson told VentureBeat in a phone interview.

Robinson says the most valuable part of the program for her was getting introduced to other startups going through AlphaLabGear’s traditional accelerator program. She’s now assisting two local startups with package design — Aldrich, which develops an electronic chip that can be attached to consumer goods products like shampoo bottles to tell companies when customers need a refill, and Arreica, a materials startup. She’s also one of the alumni serving as an instructor for Startable this summer, introducing other students to the benefits of working with Pittsburgh’s startups.