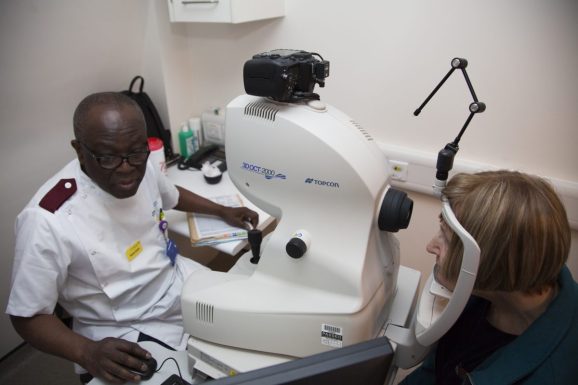 The advances in AI-driven eye disease treatment were detailed in a study being published online in the journal Nature Medicine. Results of the work that began in 2016 were first made public in a Financial Times report in February, which found AI used to analyze retinal scans for signs of the biggest eye diseases — like glaucoma, age-related macular degeneration, and diabetic retinopathy — could be more accurate than trained human experts.

Neural networks trained to discover patterns in images have also been used to do things like detect cardiovascular disease, breast cancer, and kidney disease.

“The AI technology we’re developing is designed to prioritize patients who need to be seen and treated urgently by a doctor or eye care professional,” said UCL scientist Dr. Pearse Keane in a statement shared with VentureBeat. “If we can diagnose and treat eye conditions early, it gives us the best chance of saving people’s sight. With further research, it could lead to greater consistency and quality of care for patients with eye problems in the future.”

Instead of just spitting out recommendations, the system can provide doctors with an explanation for why it chose to make a particular recommendation, as well as indicating a percentage of confidence it has in a suggested course of treatment.

This idea of sharing the rationale behind a recommendation is in line with the kind of approach Google’s AI chief, Jeff Dean, said he wants to see used more often. The AI can also be deployed on a multitude of medical imaging devices made to produce medical images of eyes.

Before it can be used in everyday eye scans, however, the AI system must go through clinical trials and receive regulatory approval. Should clinical trials prove successful, Moorfields will be able to use the AI for free across all 30 of its U.K. hospitals and community clinics, for an initial period of five years, a DeepMind spokesperson told VentureBeat in an email.

With the rise of machine intelligence in recent years, AI like the kind being developed by DeepMind with partners has often been championed as a way to democratize artificial intelligence, delivering the benefits of highly accurate algorithms to patients in parts of the world where specialists or high-cost equipment may be harder to come by than in a city like London.

More than 250 million people around the world suffer from visual impairments or blindness, according to the World Health Organization.

The eyes may be the window to the soul, but they can also be a window to more serious diseases. Diabetic retinopathy, for example, has been associated with increased risk of cardiovascular disease. A neural network created by Google was able to predict with about 70 percent accuracy whether a patient with diabetic retinopathy would go on to experience a major cardiac event like a heart attack, according to results published earlier this year online in the journal Nature Biomedical Engineering.

In other recent medical advancements, this spring Google CEO Sundar Pichai and Google’s Medical Brain team said the company has created an AI system capable of predicting whether a patient will be readmitted to a hospital. Results published in June also found that the AI system was able to predict whether a patient will die during a hospital stay with more than 90 percent accuracy in trials at two hospitals.

Alphabet subsidiary Verily Life Sciences has also been very active this year, tackling a number of projects, like the detection of sleep apnea, pharmaceutical drug discovery using AI, blood collection, health insurance, and even the creation of small needles that explode and retract in a user’s skin to draw blood with a wearable device.