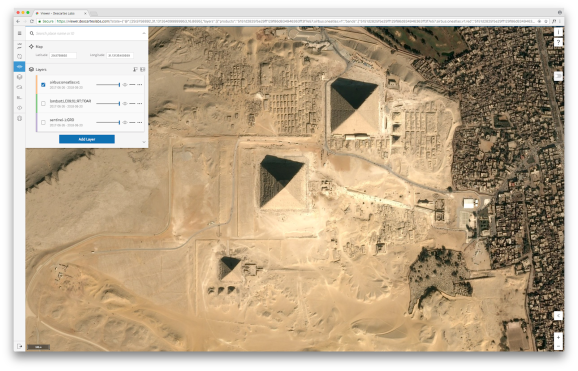 Descartes Labs, a Santa Fe, New Mexico-based geospatial analytics startup, is teaming up with Airbus to bring high-resolution satellite imagery to its platform.

Descartes notes that compared to imagery from the NASA Landsat and ESA Sentinel, the Labs Platform‘s first two data sources, the OneAtlas catalog delivers up to 15 times the per-pixel resolution — 1.5m versus 30m (and 50cm over 2,600 cities).

Within the Descartes Labs Platform, a built-in viewer tool lets data scientists navigate to imagery in the archive, select between bands, move through time series, and label reference data. Another toolset allows them to load different catalogs of datasets into discrete layers, adjust transparency, view and hide layers, manipulate vector data, and even upload custom catalogs into the data archive.

Once the data is prepped and preprocessed, it’s passed on to Descartes’ Google Cloud-powered infrastructure for machine learning model training, which crunches over nine terabytes of new data daily. (To date, it has handled 11 petabytes.)

“The entire goal for the technology is to accelerate science by automatically removing obstacles, like processing images, correcting for clouds, etc., and providing resources for running massive, near real-time analysis at scale,” Descartes Labs wrote. “[Our] customers can experiment and learn faster to make better decisions. They can determine a problem, gather the necessary data, envision and test the right learning models, and process and analyze the answers.”

The company, which spun out of Los Alamos National Laboratory, got its start in agriculture, but it has broadened its horizons since then.

In July, Descartes launched the Wildfire Watchsystem, a Twitter bot (@WildfireSignal) that updates every six hours with two time-lapse videos — one in full color and one in infrared — that track the progression of wildfires. And in 2017, it made publicly available its GeoVisual Search suite, which uses a 50-layer neural network and satellite imagery from NAIP Arial Imagery, PlanetScope, and Landsat 8 to highlight wind turbines, solar farms, football fields, and other structures on country-wide maps.

Descartes Labs raised $30 million in August 2017 in a funding round led by March Capital. Additional investors include Crosslink Capital and Cultivian Sandbox.