ARM projects that its central processing units (CPUs) for always-connected laptops will improve performance at a rate of 15 percent per year through 2020. The company said that chips based on its designs will power ARM-based Windows laptops and other devices (such as Chromebooks), and the performance for the ARM chips could improve at a faster rate than Intel-based Windows laptops.

Ian Smythe, an ARM marketing executive, said in a blog post that the company is positioning itself to gain share against Intel in the always-connected 5G laptop market.

“Over the last five years, advances in ARM technology have brought desktop-class PC performance into our smartphones, fundamentally changing how we use technology in our daily lives,” Smythe said. “This is a direct result of ARM’s annual cadence of introducing new world-class CPU designs, which have delivered double-digit gains every year in instructions-per-clock (IPC) performance since 2013.”

ARM is making the projections based on its designs in progress, as well as expected gains in process technology by its chip manufacturing partners. The company made the projection despite the fact that Moore’s Law, which predicts that the number of transistors on a chip will double every couple of years, is slowing down.

That slowdown comes amid new challenges for the semiconductors needed to handle 5G wireless network processing.

“This is the first time I have been involved in a forward-looking roadmap at ARM,” Smythe said in a press briefing.

Part of the reason for that is ARM’s desire to “develop in the open,” Smythe said.

He said that the latest example of ARM’s improving client CPU performance is the launch of the Cortex-A76 CPU, which is delivering a 35 percent gain in performance compared to the previous generation, without compromising energy efficiency.

ARM expects the first 7-nanometer manufacturing products to be in production later this year, which will give ARM CPUs a performance boost. Looking ahead, ARM foresees improvements in both manufacturing and chip design from now through 2020. 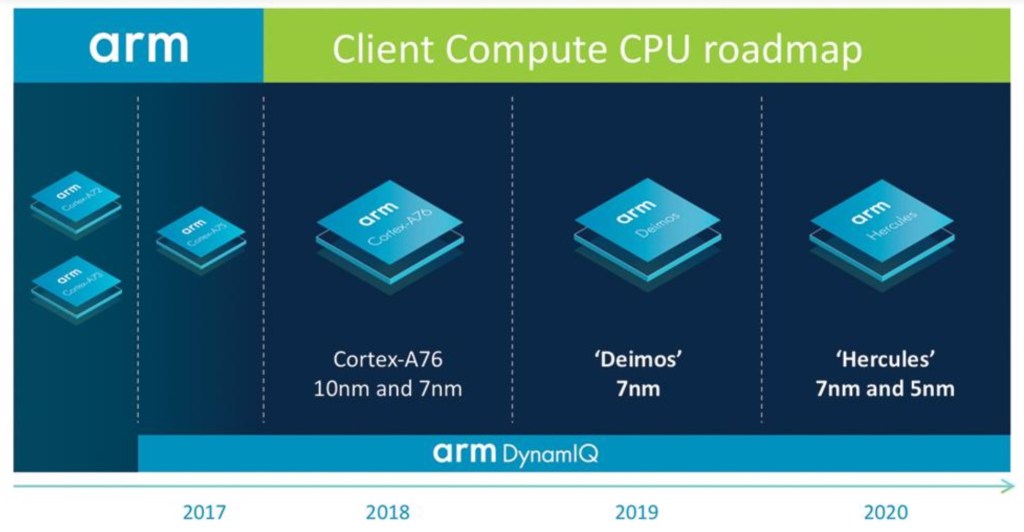 The follow-up to Cortex-A76 will be codenamed Deimos and delivered to ARM partners in 2018. Optimized for the latest 7-nanometer manufacturing, Deimos is based on Arm DynamIQ technology and is expected to deliver an at least 15 percent increase in compute performance.

In 2019, the CPU codenamed Hercules will be available to Arm partners. Hercules, also based on DynamIQ technology, will be optimized for both the latest 5-nanometer and 7-nanometer nodes. Hercules continues the trajectory of increased compute performance, while also improving power and area efficiency by 10 percent (in addition to the efficiency gains achievable from the 5-nanometer process node).

Smythe said the roadmap of ARM client CPUs has been designed to take advantage of the disruptive innovation 5G will bring to all client devices. This combined with innovations from silicon and foundry partners will enable Arm chips to break through the dominance of x86 and gain substantial market share in Windows laptops and Chromebooks over the next five years, Smythe said.

Leading PC manufacturers are launching ARM-based machines that can run Windows 10, powered by ARM-based Qualcomm Snapdragon system-on-chips (SoCs). These ARM-based laptops are already available from ASUS, Lenovo, HP, and Samsung. Along with Microsoft, these partners have given users a new choice for connectivity and an always-on experience that was not possible a year ago, Smythe said.

“2018 was an important first step in expanding the Arm PC ecosystem and showing the world that we’re no longer bound to the idea that process technology will only incrementally improve every two years and that a laptop will need charging every few hours,” Smythe said.