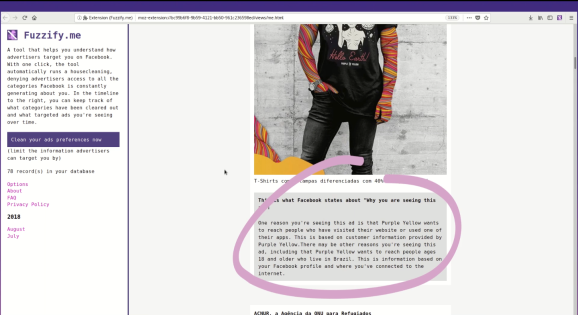 How exactly online ad targeting works remains a nebulous topic for many casual internet users. A trio of researchers is hoping to demystify the process — with a new browser extension they launched this week called Fuzzify.me.

Created by Mozilla fellows Joana Varon, Becca Ricks, and Hang Do Thi Duc — the latter of whom is the creator of Public by Default, a project that attempted to educate users on the pitfalls of Venmo’s default privacy settings —  Fuzzify.me works in Chrome or Firefox. If you have an ad blocker, you have to first uninstall that in order for Fuzzify.me to work. Once it’s installed, you get a running list of the ads you’ve been shown on Facebook, as well as an explanation of why you’re seeing that ad. 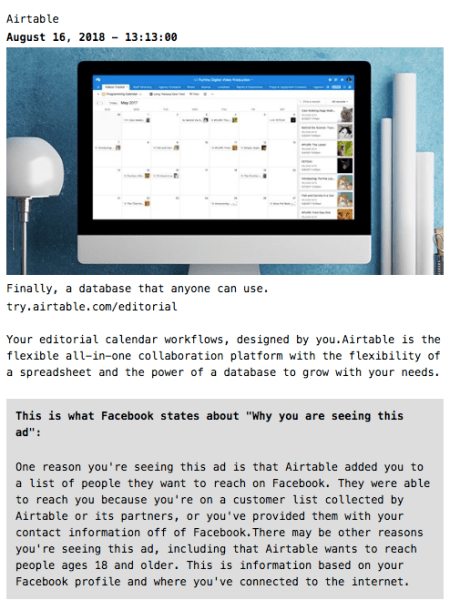 Above: The information Fuzzify.me displays alongside a Facebook ad.

This is information that users can already get by clicking on the “Why am I seeing this?” button on a Facebook ad. But users are served so many ads on Facebook, that the likelihood that someone is going to do this for every ad is slim. Fuzzify.me helps users get a more complete understanding of how advertisers target users on platforms like Facebook — what information they might be cross-referencing with the categories that Facebook allows users to target advertisers by.

Varon told VentureBeat in a phone interview that Fuzzify.me grew out of a research project into what she says are the sexist ways in which online ads are typically served. She partnered with Who Targets Me — another project seeking to demystify ad targeting. Who Targets Me had collected ads served to about 7,000 people who had downloaded their extension. Varon found that among people who had downloaded the extension, the majority of ads for baby clothing, products, and gear were served to women.

She also interviewed women about their experiences with targeted ads on Facebook. Particularly among those between the ages of 27 and 37, many were getting served advertisements for baby products — not because they had children themselves, but because children’s product advertisers target women in that age range because that’s when many women have kids. One women changed her gender from “female” to “male” on Facebook, just so that she would stop getting served ads for baby products.

“Most of the ads about baby things … were targeting not just parents, but women,” Varon said.

Fuzzify.me also allows you to clean all of your ad preferences at once, in order to limit the information by which advertisers can target you. Again, this is something that the average user could do by hand, but it’s tedious. For example, when I went to the Ad preferences settings in my own Facebook account, Facebook indicated that I was listed in 20 different categories for advertising purposes, including “Frequent Travelers,” “Gmail users,” and “U.S. politics (moderate).” I would have to opt out of each of these categories individually in order for Facebook to stop including me in ads served to that group of people.

As Mark Zuckerberg’s congressional testimony made clear, many politicians and members of the general public still have a lot of misconceptions about how ad targeting works. If you have a basic understanding of how ad targeting works — how advertisers seek to marry the data they have with the highly targeted categories Facebook has — then Fuzzify.me is a good tool to get a better understanding of its scope. But for the people who think that Facebook is selling data to advertisers or that Facebook is listening through your microphone, it’s going to take more than viewing the ads Facebook serves them in bulk to get them to fully understand how the process works.

“The idea of the extension is to bring transparency [to ad targeting] and start a discussion about who is targeting you,” Varon said.