Have you ever pushed the close button in an elevator and the door didn’t close? That’s because most of them don’t work. Twenty-five years ago, the Americans with Disabilities Act mandated longer wait times before elevator doors closed, so most manufacturers incapacitated but didn’t remove the buttons. They knew people feel better with a button to push when they are feeling impatient.

It seems cable and telco companies have taken their cues from elevator manufacturers in the design of their DVRs. In testing conducted by our team at Sense, we discovered that DVRs from the leading pay TV providers have a “power save” mode that effectively does nothing. Our energy testing on the Comcast flagship Xfinity X1 DVR found that turning on power save mode reduced power use from 26 watts to 24.5 watts. A tiny savings of only 1.5 watts — probably all coming from turning off the light that tells you it’s on! Tests of DVRs from Time Warner, DirectTV, and Verizon also showed these had no useful power saving mode either.

An independent industry consortium as well as Comcast’s own data confirm our findings. In fact, Comcast claims that, depending on usage, power saving mode on the X1 will save 1.5 KWH per year from a total of 200 KWH per year, which amounts to less than 1 percent.

In addition to the underwhelming power saving mode, the power button on the remote control for the Comcast Xfinity DVR turns the device on but won’t turn it off. According to the Comcast website, the “off” function on the remote control is disabled to keep the Comcast box and TV from getting out of sync. So you don’t even have the option of a full power-off. Looking at DVRs from the dominant providers, Time Warner, DirecTV, and Verizon, we discovered that none of them had a true power save mode, either, and they operated continuously.

You might be wondering if Comcast and other cable and telco companies have the technological know-how to build in a power save mode that really saves power. Let’s take a look at a similar product to find out. The PlayStation 4 uses 135 watts while powered on, but this is reduced to 8.5 watts in “standby” mode, and in “off” mode that usage shrinks to a miniscule 0.3 watts. Compare this to 19 watts in standby mode for the DirecTV DVR, the most energy efficient of the cable DVRs, and 24.5 watts for the Comcast Xfinity DVR, one of the biggest energy gluttons. 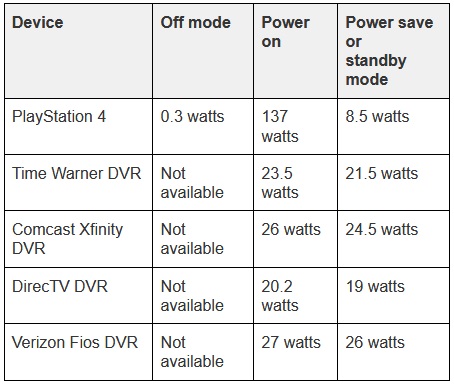 Above: Comparison: Energy demands of Cable and gaming hardware

We set out to find a fix with minimal changes to the existing DVRs. DVRs need to record scheduled programs at various times. But with the right mix of software and hardware support, these devices could go into low-power sleep mode between recordings.

There are at least two ways Comcast could do this. One would be a software fix to the current hardware. The typical set-top box is built with a chip similar to Broadcom’s BCM 7425, which demodulates the cable signal and delivers programming to your screen. According to Broadcom, the BCM 7425 has four different sleep modes built into the chip. One of the sleep modes would bring your cable box back to full operation from an extremely low power, deep sleep in five seconds. A simple software tweak could enable low power mode and significantly reduce energy usage while imposing negligible manufacturing costs on the cable providers.

Another alternative would be to add a low-power SoC (for example a Cortex M0) that would add about $1.50 to the total hardware cost, which is minimal compared to the total profit from six years (the average DVR lifespan) of monthly cable box rental fees. This upgrade would address the syncing problem by periodically waking up the set-top box, performing the sync, and then returning to super low power.

But it’s possible to go even further. Grappling with finite battery lives, the mobile phone industry has had to be cognizant of power consumption from the very beginning. Over the past decade, mobile phones have added significantly more processing power and capabilities while limiting energy consumption. Almost every smartphone built today does as much or more than a set-top box or DVR but has substantially less power.

If you compare the latest phone from Apple, the iPhone X, with the Comcast Xfinity X1, you see that most of the iPhone X specs are higher performance while consuming less power. The iPhone’s processor accounts for the majority of its energy consumption. Compared to the Comcast X1, the iPhone has a processor with more cores running at a higher speed and is also powering a display. In addition, it can handle video at an even higher resolution than the X1. They are both networked and, while they use different technologies, both the iPhone and cable DVR need to maintain contact with the network even while in idle mode.

The biggest difference is that the iPhone has been architected from the ground up with power consumption in mind, whereas power savings have not traditionally been a primary goal for cable companies. Meanwhile, most consumers are simply not aware of how much energy devices like DVRs are consuming when they appear to be off. 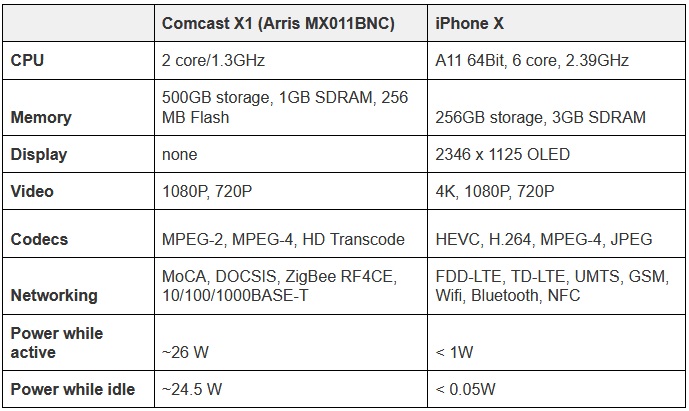 Always-on devices account for 23 percent of home energy usage — a total of $40 billion annually nationwide — and just one of these DVRs can account for around 10 percent of a home’s always-on power drain.

The realistic opportunity is probably somewhere between these extremes, but a conservative view would be that if the cable industry adopted the sorts of power saving technologies used in mobile devices, 90 percent reduction in power usage should be achievable in a cost-effective way.

Overall, DVRs and set-top boxes used something like 21 TWh in 2017. Rolling out two-thirds savings based on implementing a real power saving mode in existing designs would save more than 14 TWh of energy — over 1 percent of all US residential usage. This would save US consumers $1.84 billion per year and avoid carbon emissions equivalent to almost five coal-fired power plants. Going all the way to the potential 90 percent savings by making use of existing mobile device technologies would save consumers almost $2.5 billion per year and would avoid emissions equivalent to more than six coal-fired power plants.

Consumers cannot easily fix this problem themselves. Simply unplugging their DVRs would defeat the purpose of a DVR and disrupt recordings. Energy savings must be built into the DVR itself. But the typical DVR has an average lifespan of 6-7 years, which means that the boxes will be in households for many years to come unless providers make proactive changes. At the end of 2016, Comcast rolled out its newest DVR, the X1, to half of its 22 million customer households, a significant cost in hardware and services. For Comcast, as for other cable and telco companies, there is a need both for software updates to get whatever gains are possible for existing boxes as well as much more serious efforts around energy efficiency for future hardware.

The cable industry is wasting nearly $2 billion of consumers’ money annually and unnecessarily driving up energy production. Unlike the fake close buttons on elevators, fake power save imposes real costs on consumers and the environment. It’s time the cable companies built real energy savings into their DVRs.

Green Tech Media’s Interchange podcast interviewed a cable industry lawyer and the Natural Resources Defense Council for their response to our analysis. You can find the podcast here.