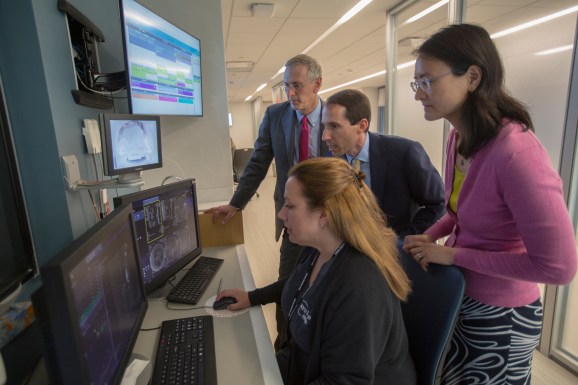 Facebook AI Research is working with NYU School of Medicine to make MRI scans up to 10 times faster through artificial intelligence. AI models being used in the fastMRI project were trained by 3 million MRI scans of the brain, knee, and liver from 10,000 clinical cases obtained by NYU.

The effort announced today uses knowledge obtained from the large corpus of images to essentially fill in the blanks in partial images to hasten the speed of MRI scans.

The goal of making MRIs 10 times faster was arrived at because that’s the speed teams at NYU and Facebook think is needed to deliver substantial benefits and move this research to clinical practice and mass adoption. Initial results from the effort will be released within the year, a Facebook spokesperson told VentureBeat in an email.

Depending on the purpose of an MRI, a scan can take anywhere from 15 minutes to more than an hour. Shorter MRI times can mean more patients benefit from MRI scans of bones or soft tissue like blood vessels, but it also means people in fragile health are subjected to the loud banging noises and cramped space for shorter periods of time. MRIs — as opposed to other forms of medical imaging, like X-rays or CT scans — could also mean less radiation exposure for patients.

The school’s Center for Advanced Imaging Innovation and Research (CAI²R) has been exploring the use of AI to improve MRI scan speed since 2016.

Above: On the left is a full data image and on the right of an undersampled image of a knee reconstructed from subsampled data.

Innovative applications of AI working with partially complete data are changing imagery in several ways and have been used to do things like restore partially erased images, reduce heavy levels of noise, and even see behind walls or around corners.

When more advances are made, Facebook will share the AI models, baselines, and evaluation metrics from the research, and NYU will open-source the image dataset used to train fastMRI in order to accelerate adoption of resulting methods in clinical practice.

Beyond medical imaging and computer vision, AI is also being used in areas like drug discovery, while companies like Corti are using natural language processing to identify cardiac arrest events during emergency calls in Europe faster than emergency operators.