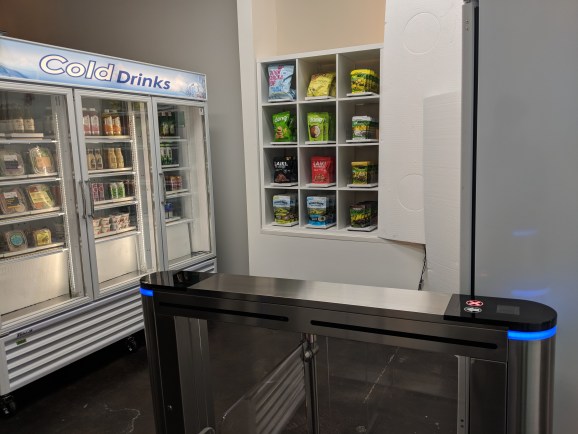 The first Go store opened in Seattle in January. New cashierless stores from Amazon are scheduled to be opened in San Francisco and Chicago, Amazon announced in May. An Amazon spokesperson asked for details about when additional Go stores will open had not responded at the time this story was published.

As with Amazon Go and competitors like Inokyo, which opened a cashierless store in Mountain View, California last week, to shop at the Zippin store you must first download an app that gives you a QR code and then scan the code when you enter the store.

Once inside, you pick up whatever you want and walk out without standing in lines or taking time to pull out cash or a credit card. A receipt is then sent to you via email.

Each store shelf and refrigerator inside the small store is equipped with scales to detect when items are picked up. Overhead cameras equipped with computer vision are also used to record transactions and track customer movement.

In its first weeks of operation, the store located near the recently opened Transbay Terminal and Salesforce Tower will only be open for one hour a day for a limited number of customers, Zippin founder Krishna Motukuri told VentureBeat in an interview.

The store will be made available to the public for limited hours starting in mid-September, according to a company spokesperson.

Zippin was part of the Y Combinator summer 2018 batch but will not take part in this week’s Demo Day, a spokesperson told VentureBeat in an email.