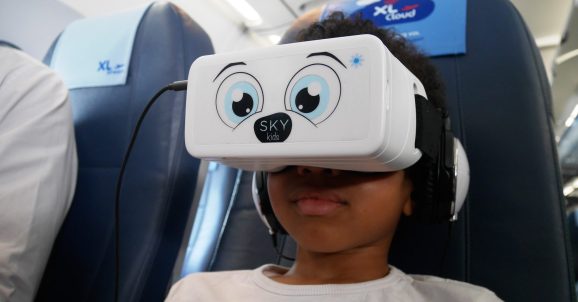 Virtual reality is becoming increasingly popular with adults and teenagers, but VR vendors have generally steered their efforts away from younger kids due to eye safety concerns. Capitalizing on that gap, French-American company SkyLights today officially announced Skykids, a new VR entertainment system designed to entertain 6- to 12-year-olds on long-haul flights.

Skykids starts with a small-sized “wearable cinema” called Bravo Theatre, enabling kids to watch a selection of curated 2D, 3D, and forward-facing 360-degree films without leaving their seats. Over-ear headphones are provided for audio, and a child-friendly video catalog from 20th Century Fox is available for kids to choose from.

Anyone who has flown with or near kids will appreciate the virtues of a self-contained entertainment system. As SkyLights points out, research suggests that children under 12 typically get bored less than an hour into flights, and an Expedia survey said that unruly kids are the second most annoying type of passenger. Assuming a VR headset is actually kid-safe, it could be a better solution than a screen mounted in a seatback or a tablet with speakers.

According to SkyLights, the Skykids VR headset service was in fleetwide testing at French airline XL Airways since July 1, and after significant successes with customers, will continue to be offered past its initial summer vacation scheduling. The company says that demand for the headsets outstripped supply on “just about every flight,” and the airline described customer feedback as “nothing but positive.”

SkyLights will offer Skykids to other airlines alongside its higher-end Allosky VR system, which is targeted to adult customers in business class. Considerably sleeker and boasting a 1080p resolution per eye, Allosky currently is used for an average of four hours by passengers, with a 90 percent recommendation rate.