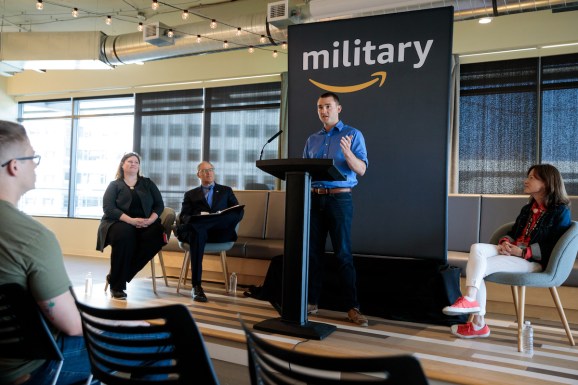 Mike Cooper, a cloud support specialist with Amazon and an Apprenti graduate.

Shawn Farrow had been trying to get a full-time job in the tech industry since getting his associate’s degree in computer science from a Seattle-area community college in 2013. He was attending a coding bootcamp in 2016 to brush up on his skills when he heard a tech apprenticeship program called Apprenti was launching in the area. He was immediately excited about the prospect of getting a guaranteed role at a tech company, even if it was only a year-long audition.

“I went to school multiple times, and each time that was the outcome I was looking for … to start my career … and Apprenti does that,” Farrow told VentureBeat. Farrow completed his apprenticeship with Seattle legal tech company Avvo in September and now works for them full-time as a software engineer.

Though apprenticeships have been utilized by blue collar industries for years, they have gained a new level of prominence among white collar industries in the U.S. as the cost of higher education reaches historic highs. Apprenticeships could fill a much-needed gap in the tech industry, in particular, where companies complain of a skills gap but not everyone can afford a four-year computer science degree.

Apprenti, now two years old, is one of the more notable of these programs, having received funding from the U.S. Department of Labor and Washington State, J.P. Morgan Chase, and Accenture. Additionally, two of the largest tech companies on the market — Microsoft and Amazon — have taken some Apprenti apprentices under their wing.

But before such apprenticeships can become standard in the tech industry, programs like Apprenti will have to prove that they can scale nationwide — and that they can sufficiently prepare entry-level talent for the work they will be expected to do.

Interested students apply online and complete an assessment with about 115 questions measuring their critical thinking, logic, and math skills. If they get above a certain composite score (the number varies depending on the market) they are brought in for interviews with the hiring companies, depending on job availability.

Once an apprentice is hired, they go through roughly 20 weeks of classroom training in the skills needed for that job. The training is currently provided to apprentices at no cost. Apprenti works with third-party training providers, including Code Dojo, Microsoft, Cisco, and Northeastern University, to develop a curriculum and train the students, who then complete a one-year apprenticeship. Apprenti says that the median salary for apprentices across all markets and jobs is $51,000 plus benefits.

So far, Apprenti has graduated 12 students, and about 10 have been retained by the company they’ve apprenticed for. Those who have been retained now bring in a median salary of $88,000 — compared to about $29,000 before they started the program. Apprenti has also shown promise when it comes to creating a diverse pipeline of talent: 81 percent of apprentices who have come through the program so far are women, underserved or underrepresented persons of color, and/or military veterans.

But no matter what retention statistics a program has, signing on to be an apprentice can still be a nerve-wracking commitment. Apprentices dedicate a year of their life to learning the ins and outs of one company’s systems in the hopes that they’ll be hired for a full-time job afterward — if not, it’s back to the drawing board.

Apprenti executive director Jennifer Carlson acknowledged that this dynamic can be challenging.

“They’re not an intern, but yet they are kind of in a one-year period of an audition for that job,” Carlson told VentureBeat in a phone interview. “So the apprentice has got both the pressure to perform but is also trying to fit in culturally to the organization.”

“In the end, there’s no guarantee that when your year is up that they’re going to convert you into a full-time employee — it‘s kind of like self-advocation, where you have to try to get an interview,” David Broxton, an apprentice for Microsoft, told VentureBeat. “I think that’s weighing on a lot of us most of the time.”

Broxton, who is nine months into his apprenticeship, added that another point of confusion for the apprentices was whether Microsoft would give them the same interview as a typical entry-level engineering or developer candidate. There’s a fear that these interviews could cover topics that apprentices didn’t learn in their classroom and on-the-job training.

Carlson said Apprenti has found that mentorship is the key to making these positions actually feel like apprenticeships, rather than internships. She said that the most successful hiring companies have at least three other people doing the same work as the apprentice so that they can learn from multiple people within the organization.

Avvo engineering director Hunter Davis said that working with apprentices has inspired the company to change how it works with all of its entry-level talent. Now every new hire at Avvo is paired with a mentor.

“I think it improves the quality of life for our employees. They feel more supported. They are never alone; they are never stuck or ratholing,” Davis told VentureBeat in a phone interview.

Apprenti plans to ramp up affiliate programs in Baton Rouge, Louisiana, and Nashville by the end of the year and will likely launch three more programs in the first quarter of 2019, according to a spokesperson.

Robert Lerman, an economist at the Urban Institute, told VentureBeat that there are still a few challenges in getting apprenticeships to scale among more industries in the U.S. First is the need for industry-standard frameworks for successful apprenticeship and the skills an individual needs to gain to show that they’ve achieved competency. Second, apprenticeship programs need people who can pitch companies on the benefits they offer.

“Most companies don’t really know about apprenticeship, [and] they might find it very cumbersome to start such a program … and [worry] that it’s a big lift to change policies of recruitment and retention,” Lerman said.

Carlson emphasized that Apprenti‘s ability to expand to new markets really depends on where they see interest from employers, underscoring the idea that having apprenticeships replace four-year-colleges in the near future is not likely a reality.

“We’re not unfortunately in [a position[ — at least in the tech sector — where ‘If you build it, they will come.’ This is an employer-driven model, and absent having two or three companies in a market that can drive consumption and help show the value proposition of the talent in the backyard to other companies that are located there — that’s really where that has to start,” Carlson said.