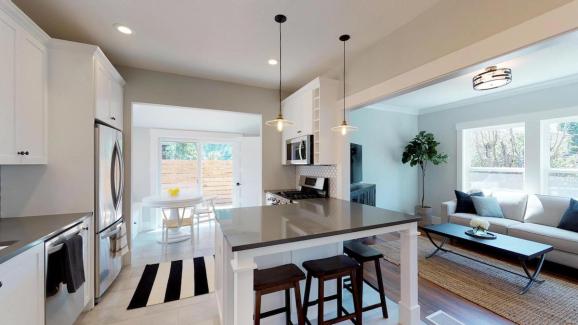 One of Bungalow's apartments in Portland, Oregon.

If you’re moving to a new city, finding a place to live is only half the battle. There’s also the challenge of finding roommates you click with and figuring out which neighborhoods have the type of housing that fits within your budget, especially if you’re on an entry-level tech salary.

Cofounders Andrew Collins and Justin McCarty say that the idea for Bungalow was born out of their own housing frustrations — both moved to San Francisco shortly after graduating college to work for tech companies in the Bay Area. They found it difficult not just to find a room in a city with a lack of affordable housing but to also make friends and find roommates they enjoyed spending time with.

“People have been finding roommates on Craigslist for ages — roommate living is not a new thing,” Collins told VentureBeat in an interview. “The kicker is that people have terrible experiences with that … [but] we can operationalize and do things that you couldn’t do if you were looking on your own.”

Bungalow has a plan for simplifying the rental process. First, it finds long-term homeowners who have grown tired of finding new tenants year after year. Collins said that Bungalow looks for listings on Craigslist and Zillow that have had vacancies for a long time and talks with local real estate developers to find new properties. The company specifically looks for large, multi-family homes that homeowners are finding more difficult to rent out as fewer U.S. adults are starting families.

Bungalow signs a multi-year lease with the homeowner and then rents out rooms in the house or apartment to people who seek housing on its platform. Bungalow runs a credit check and background check on every applicant and then conducts a series of interviews to match tenants with open spaces and roommates.

Tenants have to sign at least a four-month lease. In addition to monthly rent, they are charged a “membership fee” that includes the charges for utilities, Wi-Fi, a monthly cleaning service, and events that Bungalow hosts. Bungalow also furnishes the common areas and deals with maintenance requests on the homeowner’s behalf.

Since launching in stealth a year and a half ago, Bungalow now operates in the Bay Area, Los Angeles, New York, San Diego, and Seattle. As part of today’s announcement, the company also announced that it has expanded to Portland, Oregon and Washington, D.C.

So far, Bungalow has placed about 750 roommates throughout a couple hundred properties, and it aims to be in 12 total markets by the end of the year. The median age of renters thus far has been between 26 and 27 — of those who signed a year lease, about 82 percent have decided to renew it.

Collins and McCarty said one thing that’s surprised them is how much Bungalow has resonated in the “second-tier” markets — Los Angeles, San Diego, and Seattle — which are up-and-coming markets for tech jobs. They say that this underscores just how challenging it is to find affordable housing even outside of the most expensive cities in the U.S. They also say that many of the renters who have come through Bungalow thus far are moving to start a new job and report that living in a Bungalow property has allowed them to meet people more easily.

Bungalow is the latest in a series of venture-backed startups that aim to make it easier to search for housing online — from renting out spaces temporarily on Airbnb to Zillow, which provided another avenue for posting real estate listings online, to Opendoor, which actually buys and sells the homes itself. Collins and McCarty credit Airbnb with helping set the regulatory framework necessary to allow Bungalow, as a tenant, to rent out properties for long periods of time in these cities.

When VentureBeat spoke with Collins and McCarty last week, they said the monthly rent for their properties in Brooklyn ranged from $800 to $1,700 per month. That’s not an excessive amount, considering that the average monthly rent for a one-bedroom in some Brooklyn neighborhoods can be as high as $3,800 per month. However, some of the properties have as many as six bedrooms, so prospective tenants need to be ready to have a lot of roommates.

Collins said that Bungalow is able to make money by renting rooms individually at rates that together come to a slightly higher amount than the lease from the homeowners. The company is not disclosing typical revenue margins on its properties, but Collins said that “as we scale, this small margin becomes significant.” However, Bungalow is taking on a lot more risk than many other housing startups by serving as a proxy landlord — the margins can easily be diminished on a property that requires a lot of upkeep.

To mitigate some of that risk, Bungalow is also taking on a $50 million debt facility, which will be used on property maintenance.

“[Taking the debt facility] allows us [to achieve] 10 times our growth without needing to access the equity market again — it really allows us to set our own destiny on the growth front,” McCarty told VentureBeat.

Another revenue stream Collins said the company will be exploring is partnerships with direct-to-consumer companies that are popular among millennials, like Casper and Blue Apron. These partners would give Bungalow residents discounts on their products and services.

Collins said that Bungalow will be using the venture funding to build out its R&D and marketing teams — the more properties Bungalow rents out, the more data it’ll have to find new properties in its various markets, as well as making better roommate pairings.The company currently has 38 employees.