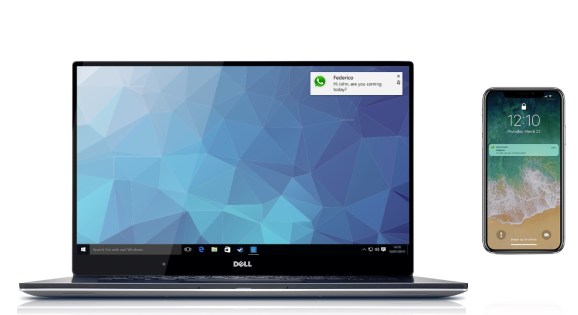 Dell Mobile Connect will make it easier to connect all of your notifications on both a Dell PC and your iPhone with its upcoming fall update.

In January, Dell introduced Dell Mobile Connect software to marry the smartphone and the PC. The software let you make and receive phone calls directly from your computer, and it let you send and receive text messages on your PC screen. This allowed you to stay connected on your PC without worrying that you’re missing phone notifications or calls.

Now Dell has added deeper integration, allowing all iOS app notifications such as WhatsApp messages, calendar reminders, and other notifications to be displayed on the PC screen.

Dell showed off the technology at IFA, the big tech trade show in Berlin this week. Coming this fall, the Dell Mobile Connect free update will let you stay constantly connected and have full access to calls, texts, notifications, and mobile apps right from your Dell PC screen.

Users will no longer need to split their attention between the two devices they use the most, the PC and the smartphone.

Since its launch in January 2018, over 7 million phone calls and text messages have been made using Dell Mobile Connect. The product is available for free on all consumer Windows 10 XPS, Inspiron, Vostro, and Alienware PCs purchased after January 2018.

It leverages Bluetooth and Wi-Fi Direct to make it work in a secure and private way. That means the connection between the phone and the PC is point-to-point — not going through the internet, which carries the risk of being hacked. Your phone data can only be accessed on your paired PC while you are in range of Wi-Fi Direct or Bluetooth.

You are not actually running an Android app on your PC, by the way — you are just viewing it on your PC display as it runs on the Android smartphone, and you can control it through your PC’s input systems via Bluetooth or Wi-Fi Direct.

Dell is preloading the software on new Dell consumer and business PCs, and you can download the free smartphone app for either Android or iOS.