Smart speakers. It seems everyone and their mother has one these days, and that’s not too far from the truth — 91 million people (about a third of the U.S. population) use a voice assistant, such as Apple’s Siri, Amazon’s Alexa, Microsoft’s Cortana, or the Google Assistant, at least once a month, according to eMarketer. Moreover, sales of smart home speakers are on the upswing, growing 187 percent in Q2 2018.

So it’s not surprising that Huawei wants in on the action.

During its IFA 2018 keynote in Berlin today, the ‎Shenzhen company took the wraps off the Huawei AI Cube, a smart speaker meant to compete with heavyweights like the Google Home Amazon’s Echo lineup. It’s not your average voice-recognizing, command-performing assistant, though — the AI Cube has a 4G router built into it and proprietary audio technology it claims delivers “unprecedented” sound quality.

“The Huawei AI Cube represents a new easy and convenient way to control your smart home devices and deliver high-quality audio,” a Huawei executive said during a pre-briefing. “It also represents our commitment to innovation and collaboration between telecommunication, technology, and new AI technology … We think we can build a better-connected world with more AI devices.”

Let’s unpack that a little.

The AI Cube’s diminutive plastic-and-fabric body almost invites you to carry it around. It’s 116mm x 116mm x 218mm and weighs about 900g, and in my brief time with it, it seemed noticeably lighter and more compact than the Google Home. The ports are hidden inconspicuously beneath the base, giving it a streamlined, minimalist appearance (save a circular array of LEDs on the top that light up when it hears or responds to a command), and the fabric speaker mesh is to an extent customizable — it comes in several different colors (yet to be announced). 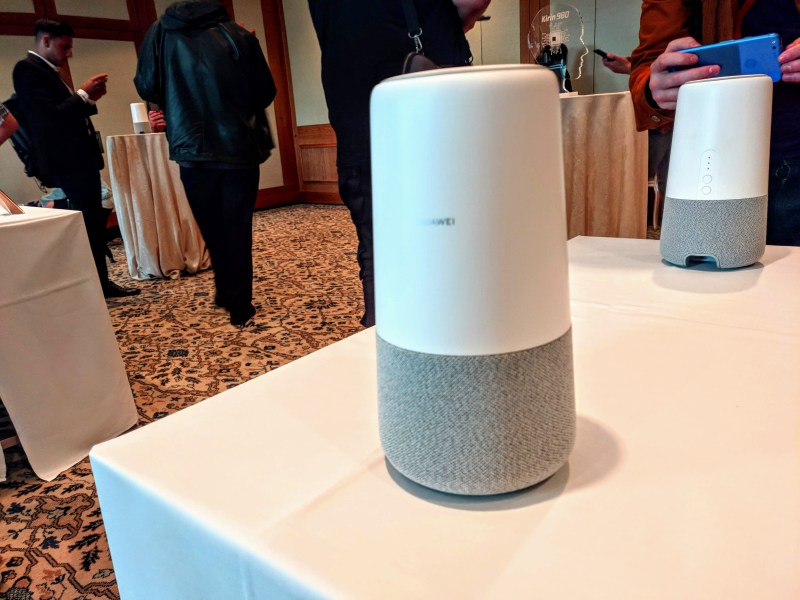 Members of the press weren’t given a chance to try the AI Cube’s hotspot feature, but it’s powered by a 4G LTE modem that can hit speeds up to 300Mbps (Cat. 6); a SIM card slot and Huawei’s HiLink app help you get connected in minutes. If cellular doesn’t float your boat, the AI Cube packs an 802.11ac dual-band (2.4GHz/5GHz) Wi-Fi chip that transmits data at speeds of up to 1,200Mbps.

Huawei opted not to follow in Samsung’s footsteps by developing an assistant of its own, instead partnering with Amazon to get Alexa up and running on the AI Cube (via Alexa Voice Services). It’s a bone-stock configuration that supports the standard array of Alexa commands (“Alexa, set a timer”) and integrations (it works with more than 20,000 smart home devices from 3,500 brands), and provides unfettered access to the roughly 50,000 apps — skills, in Amazon’s parlance — in the Alexa Skills Store.

So how does it sound? Surprisingly good. I was impressed by the bass coming out of the little thing, which seemed well-balanced and not too boomy to my ears. The jury’s out on how it handles less acoustically forgiving rooms, but I’d put what I heard on par with anything my Google Home has produced.

Less impressive is its voice recognition. Huawei says it’s using four “far-field microphones” to listen for commands, but whatever tech lies under the hood, it definitely needs some work. More than once, I couldn’t get it to respond to the hotword (“Alexa”) after repeated attempts.

To be fair, Huawei’s engineers have plenty of time to recalibrate. AI Cube is a way out from launch — it’s set to hit store shelves “this holiday” in Europe, with pricing to be announced at a later date.

I’ll reserve full judgment for now, but I’m struggling to see a standout selling point here. Sure, the AI Cube’s 4G hotspot might come in handy in a pinch (if your smartphone doesn’t have that feature), and the audio quality seems decent enough. However, there’s not much else to differentiate it, and with smart speaker competition from Bose, Anker, Samsung, and dozens of others, Huawei better have a trick up its sleeve if it hopes to gain any ground.

Alongside the AI Cube, Huawei announced the Huawei Locator, a Tile-like locating beacon with cellular connectivity. The IP68 dust- and water-resistant puck has a gyroscope and accelerometer, lasts up to 15 days on a charge and up to 60 days on standby, and boasts superior accuracy (within 5 meters outdoors and within 30 meters indoors, Huawei claims). That’s thanks to support for all four major satellite positioning systems, including GPS, GLONASS, Galileo, and Beidou, plus Assisted GPS (which triangulates location from nearby cell towers) and Skyhook’s Wi-Fi Positioning System. 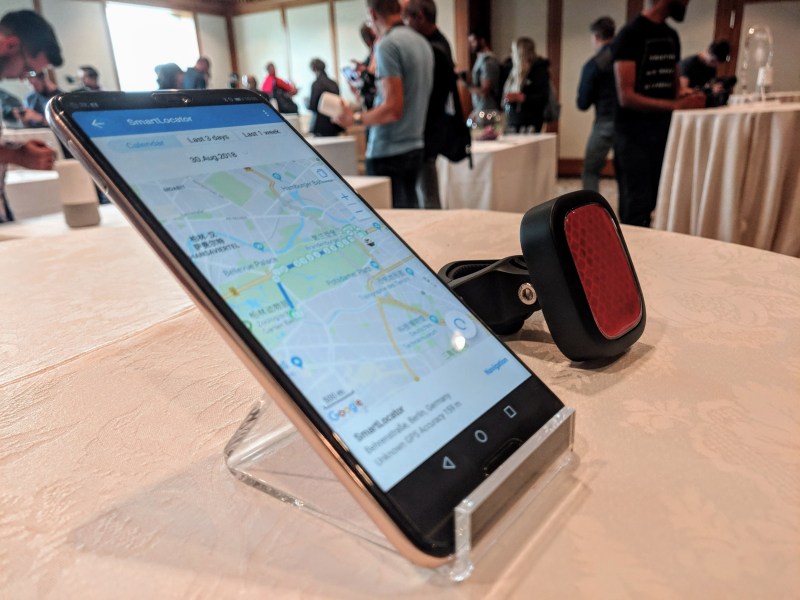 The Huawei Locator works with all major cell bands (and can automatically switch between them) and pairs to devices via Bluetooth Low Energy. There’s an SOS button that triggers an alarm when pressed and a proximity-based service that buzzes the device if you take it outside a predefined, geofenced area.

Huawei said it’s intended for “pets, kids and elders, baggage, and valuables.” As with the AI Cube, Huawei Locator pricing has yet to be announced, but it has a firm European launch date: October. 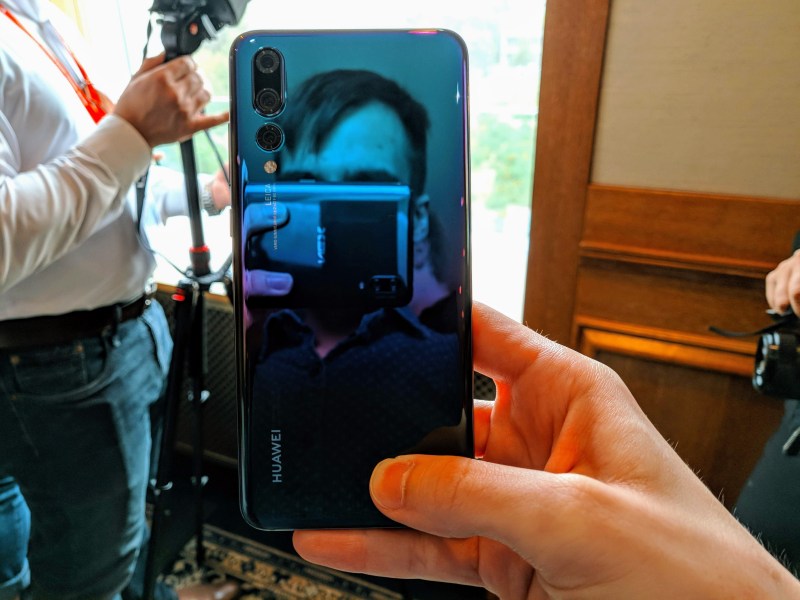 Last, but not least, Huawei debuted the Mate P20 and P20 Pro in four new colors: two in a shimmery gradient (Morpho Aurora and Pearl White) and two in leather. All have with 8GB of RAM and 256GB of storage.

Per Huawei: “The Morpho Aurora was inspired by the Morpho butterfly, while the Pearl White exudes the same elegance as the iridescent mother-of-pearl.”

Pricing and availability are forthcoming.