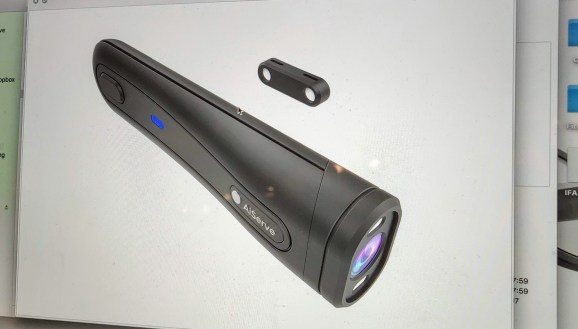 Visual impairment is one of the world’s most common ailments. An estimated 253 million people live with vision problems, with blindness affecting 36 million of those. Canes, guide animals, and specially adapted crosswalks make navigating busy sidewalks and city streets a little easier, but they’re not always practical.

The folks behind Leipzig- and Berlin-based AiServe believe that artificial intelligence — specifically, natural language processing and computer vision — might be able to lend an unobtrusive helping hand.

Gustavo Madico founded AiServe in 2017 after leaving a post at Peel Technologies’ China division. He and a small team of engineers aim to build a machine learning system that “learns how to walk like a human.”

Here’s the gist: The system will run on a wearable with a camera, microphone, and a battery that lasts a few hours on a charge. As it ingests new visual data, it’ll start to recognize sidewalks, corners, and pathways with greater confidence, and in time it will map out entire city blocks and neighborhoods.

The computer vision algorithm’s data will inform a navigational component that, through voice commands and other cues, will help wearers get from one place to another. Its instructions will be much more precise than most mapping apps, Madico said — rather than naming particular streets or thoroughfares, it’ll say something like “Make a left turn at this corner” or “Walk straight ahead for 100 feet.”

AiServe plans to release a production model in the U.K. and Germany within a year. It’ll be priced at about $2,905, although most users will pay much less — Madico said it’ll partner with health care and insurance providers in each country.

In recent years, there’s been a blossoming of technologies for the visually impaired. Microsoft this year released Soundscape, an iOS app that uses GPS, compass, and mapping data to generate spatial audio cues. London’s Wayfindr app taps Apple’s Bluetooth iBeacon technology to triangulate a user’s position and transmit audible instructions. And Sunu’s eponymous Sunu Band emits a high-frequency sonar that bounces off of objects and vibrates to indicate their distance apart.

AiServe estimates that 69 percent of the $40 billion assistive technology market in the U.S. goes to visual impairment aids.