RealNetworks is launching Scener, a web-based platform that lets you leave synchronized commentary on shows and movies streaming on Netflix, Hulu, and YouTube. The service lets you add a layer of social commentary to your favorite shows — you can leave a comment at the exact moment in time that something happens in the show. Your friends can then watch the show and get your reaction to a scene as they‘re watching it, so there will be no spoilers.

It’s a clever way to add two-way, picture-in-picture commentary videos to entertainment that was originally intended as a one-way media. And it’s a way to make watching TV shows and movies as social as watching livestreamed games has become. Scener is the latest innovation from Seattle-based digital media pioneer RealNetworks, where it was incubated as a new business.

“Scener is a free platform that lets anyone watch and create picture-in-picture reaction commentary for videos,” said Joe Braidwood, chief marketing officer and cofounder of Scener, in an interview with VentureBeat. “Think Twitch, but for shows and movies” rather than video games.

It’s also a great way for celebrity commentators to make hosted videos that their fans can watch. Scener debuts today with over 600 hosted movies, episodes, and videos by celebrity hosts such as Filup Molina, a YouTube creator with 1.5 million channel subscribers.

“With Scener, Filip can can overlay his comments on the viewing experience automatically,” said Daniel Strickland, chief technology officer and cofounder of Scener, in an interview with VentureBeat. “Otherwise, it would take him hours to do this editing, and there are copyright issues.”

You can follow a host if you wish. The hosts can use different styles, such as leaving small comments on certain scenes or overlaying a running commentary on the entire show. Film directors can leave commentary on their own films. The platform has Patreon integration so that hosts and other creators can be compensated for their comments. 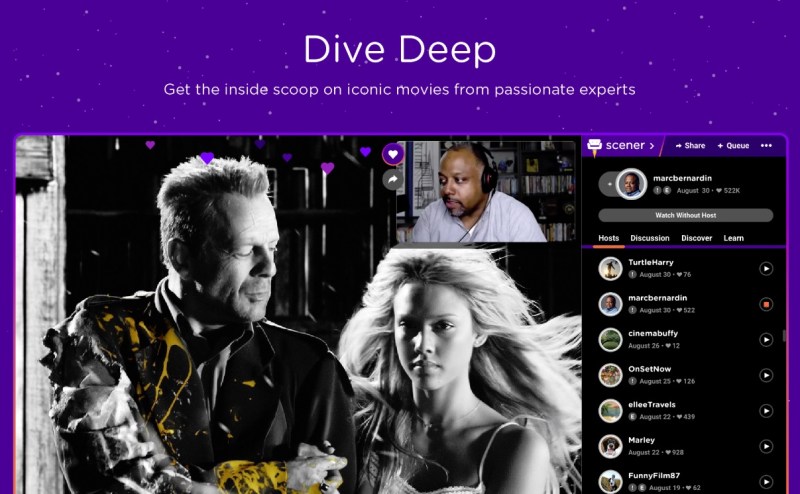 Scener takes the form of a Google Chrome extension for viewing content on laptops and desktops. It doesn’t alter the media on Netflix, Hulu, or YouTube, instead creating a free overlay on top of underlying media. Because of this, Scener is able to avoid copyright issues, and it uses publicly available Chrome application programming interfaces (APIs), Strickland said. If you hit the back button on your web browser while watching a commented Netflix video, you go right back into Netflix’s own show-browsing interface.

“It’s as if there is a separate product side by side, and so it has no impact on streaming subscriptions our customers already have,” said Braidwood.

To get started, viewers can go to Scener.com to add the free Scener Google Chrome extension for laptops or desktops.

Scener’s hosts at launch include New Rockstars, which unpacks fan theories behind Breaking Bad. Formerly incarcerated activists Jayda Rasberry and James Nelson give an insider’s look at what prison is really like while watching Orange is the New Black. Hannah Pilkes, a breakout Vine star, adds her comedic take to The Santa Clarita Diet, Gossip Girls, and Friends. And Marc Bernardin, Marvel and DC comics writer and co-host of podcast Fatman on Batman with filmmaker Kevin Smith, gives an in-depth, writer’s perspective on Sin City.

But it‘s not just for celebrities. With Scener, anyone can showcase their personality or expertise by hosting a show, movie, or video clip.

Commentary can be shared publicly to help grow and build new audiences, or it can be invite-only for friends and family. By signing up to Scener, viewers can engage further by liking and following their favorite hosts and commenting on their videos. 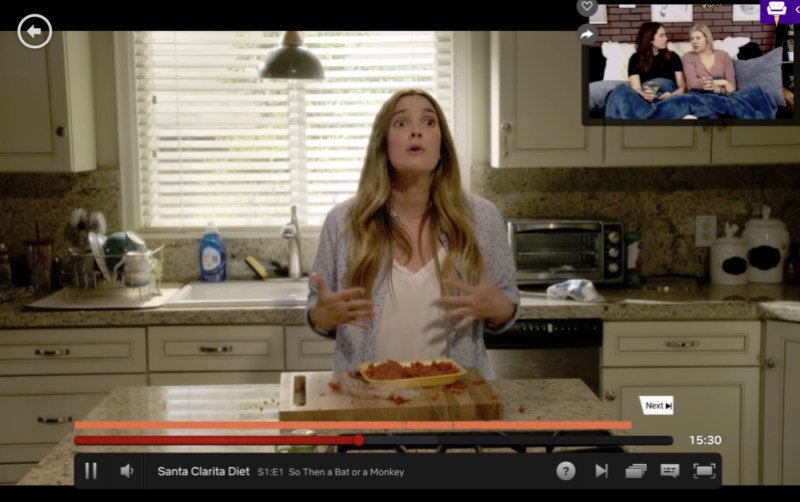 Above: Scener lets you insert video comments into your favorite shows.

“I was a huge Game of Thrones fan, and I liked fan theories, but I was frustrated I couldn’t rewind Twitter,” said Strickland. “I also rarely watched shows when they aired.”

He took the idea for Scener to Rob Glaser, CEO of RealNetworks, 18 months ago, and they put an engineering team to work on it. The hardest part was to synchronize Scener comments with the exact moments in a show or movie that the commenter was reacting to. This time syncing was crucial to avoid spoilers, Strickland said.

“We built it as a layer that doesn’t interfere with the viewing experience,” Braidwood said. “It’s the easiest way for people to seamlessly record and share reaction videos. The reason we are really excited is we think it has the potential to broaden the dialogue between makers and consumers of entertainment.”

Audiences are hungry for new platforms, tools, and communities to enhance traditional film and video viewing by including more cross-pollination, fan theories, and creative feedback.

Scener’s goal is to enhance storytelling and story consumption, and platforms like Scener will help studios, directors, producers, and writers make more informed decisions about the content their audiences crave.

“Over 20 years ago, we at Real revolutionized media by inventing the world’s first commercial internet streaming system,” said Rob Glaser, executive chair of Scener and CEO of RealNetworks, in a statement. “With the launch of Scener, we’re reinventing the streaming experience itself.” 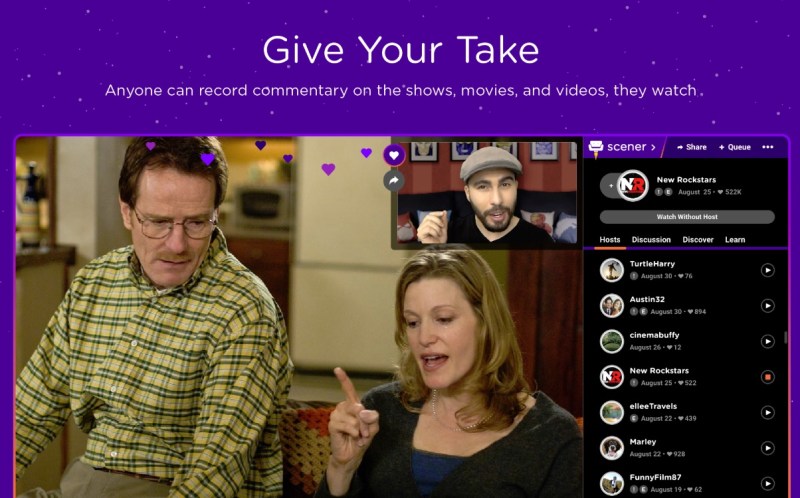 “The vision for Scener came from the desire to rewind social media commentary for the big moments in Game of Thrones episodes,” said Strickland. “Since then, we’ve been hard at work to create a whole new way for people to watch their favorite shows and movies together.”

Scener is launching first with Netflix, Hulu, and YouTube, with over 600 hours of picture-in-picture commentary and reaction videos already created. More platforms will likely be added later. Scener is debuting with a U.S. focus first, but people overseas can use it, so long as the content is available in their countries. To create video commentary, you don’t need expensive broadcast equipment — a laptop with a webcam is fine.

Strickland said that all content is copyright-protected and works within the entertainment industry ecosystem. And if lots of people comment on the same scene in a video, an upvoting system allows the best comments to rise to the top.

“We are curious how people are going to use it,” Strickland said. “We think consumers will love this and the industry will benefit.”