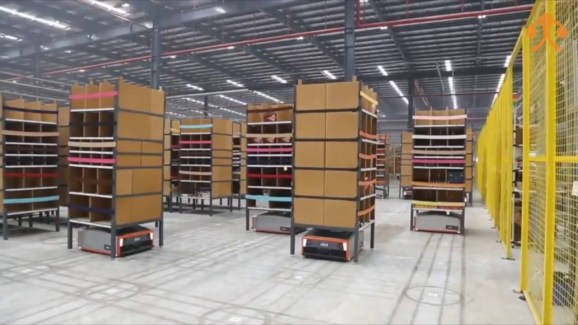 Fulfillment is a $9 billion industry. Roughly 60,000 employees handle orders in the U.S., and companies like Apple manufacturing partner Foxconn have deployed tens of thousands of assistive robots in assembly plants overseas. But despite all the manpower and machinery, a mere 30 percent of warehouses in the U.S. are operating efficiently, according to a study by the Georgia Institute of Technology.

That’s where GreyOrange — and its investors — see a golden opportunity. The robotics systems company, which is registered out of Singapore, today announced a $140 million funding round led by Mithril Capital, with participation from existing investors including Blume Ventures. Ajay Royan, who cofounded Mithril Capital with Peter Thiel, will join the startup’s board.

GreyOrange claims it’s the largest round ever raised by an industrial robotics company.

Cofounder and CEO Samay Kohli said the funds would be used to grow its international supply chain and R&D division, which includes a planned center in Boston, Massachusetts. In August, GreyOrange announced plans to establish a headquarters in Atlanta, Georgia; hire 50 new employees; and deploy 740 robots ahead of construction of a manufacturing plant in the U.S.

“GreyOrange offers robotics technology for operating flexible automated warehouses and has the largest market share globally in this space. We’ve grown rapidly in recent years and will accelerate the expansion of our regional teams, especially within the U.S. We strongly believe in thinking global but operating locally. As we continue to invest heavily in the R&D of our products, we will solve new problems for our customers and help transform the industry,” Kohli said.

GreyOrange’s area of expertise is supply chain management, where it believes it can reduce 10 to 15 percent of inventory in transit with autonomous machines. Butler PickPal, a logistics center robot the company announced in March, uses computer vision and a six-axis arm to pick up boxes, pouches, bottles, and vacuum-sealed packages weighing up to 8.8 pounds.

Working collaboratively with a warehouse worker, Butler PickPal achieves about 500-600 picks per hour. Linear Sorter, another mechanical helper in GreyOrange’s product portfolio, can handle more than 8,000 different kinds of apparel across 1,500 styles.

But it’s betting it can carve out a substantial slice of the intelligent machines market, which is forecast to be worth $3.1 billion by 2020. To that end, it intends to deploy an additional 20,000 robots in factories across the country.

GreyOrange was founded in 2011 and has offices in Singapore, India, Japan, Germany, and the U.S. It has raised more than $175 million from investors including Tiger Global Management, Mitsubishi, Flipkart, and Project Verte, and counts more than 450 among its staff.