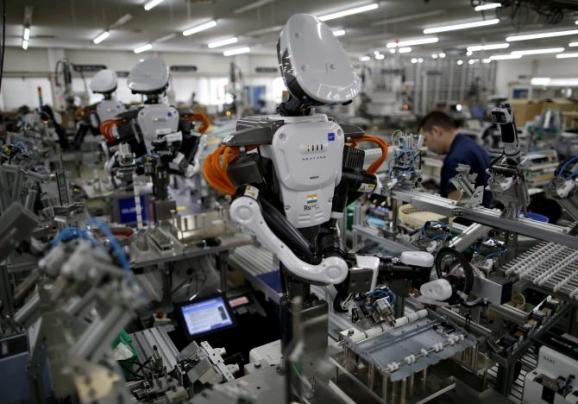 Humanoid robots work side by side with employees in the assembly line at a factory of Glory Ltd., a manufacturer of automatic change dispensers, in Kazo, north of Tokyo, Japan, July 1, 2015.

The technology uses a combination of radio wave beacons, software, and mobile sensors to track the movement of objects and people within a defined space and promises accuracy up to 2 centimeters from an exact location over a range of 500 meters.

CEO David Mindell sees this technology becoming essential to virtually every part of future economies, from how robots get around in fulfillment centers and factories to drone deliveries and autonomous vehicles.

Mindell is a professor at MIT focusing on aerospace engineering, history of technology, and the future of work, and he has a background in deep-sea robotics. He wants his system to become a successor to GPS, particularly in environments where GPS can become a challenge, like indoors, underground, or in cities.

As part of today’s news, partners like Eckhart and ZPMC will incorporate Humatics tech into their automated guide vehicle (AGV) systems in factories to replace systems using magnetic strips with a virtual grid.

In time, Mindell believes cities — as they become more connected by internet of things devices and autonomous vehicles —  will come to need spatial intelligence systems like the kind Humatics offers in commercial or industrial settings today.

“If you look inside an advanced manufacturing facility today, you see what a city is going to look like in five or 10 years,” he said. “There’s no question that for automobiles or aerial vehicles to become trusted and robust and safe in urban environments, they have to have this extreme relational relationship with what’s around them. And that’s really what we’re building, in the form of navigation systems, are these precision relationships between these three elements: people, robots, and infrastructure.”

In addition to its use in factories today, Humatics is also currently being used to track real-time positions of New York City subway trains.

Humatics investors include Lockheed Ventures, Airbus Ventures, and others who participated in an $18 million funding round last September.

The company was established in 2015 but began developing its technology four years ago. In February, Humatics acquired Time Domain, which also uses radio waves for tracking machinery, to incorporate the startup‘s technology into its platform.

Other systems created for tracking the location of objects beyond GPS include Chronos, which was developed by MIT CSAIL engineers and uses Wi-Fi for accuracy within tens of centimeters.