Apple revealed a new A12 processor for its new iPhone XS and iPhone XS Max smartphones just announced at the company’s event on the Apple campus.

The new chip is Apple’s first 7-nanometer chip, which means the width between the circuits is just 7 billionths of a meter. The processor has a four-core graphics processing unit (GPU) with 50 percent better graphics performance features than the previous generation.

The 64-bit chip has six cores on its central processing unit (CPU), and it has an eight-core Neural Engine, which is designed to do real-time machine learning to perform tasks like recognizing faces. 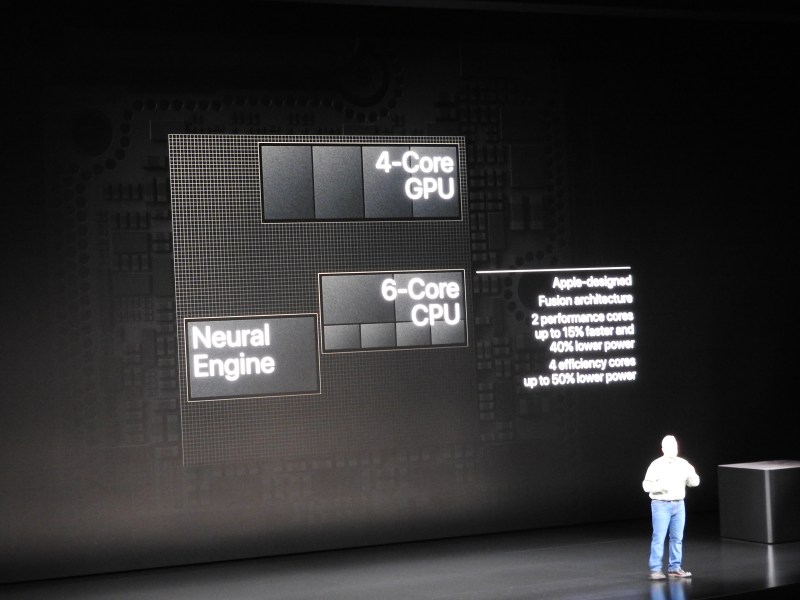 Apple designs its own chips to keep more of the profits inside the company, rather in the hands of its competitors like Samsung. But once those chips are designed, Apple uses TSMC to manufacture the chips. It designed its A series chips for its iPhones and tablets, while it has created its new S4 processors for the Apple Watch Series 4.

Each time Apple creates a new major product line, it also creates a design for a new family of processors. And at each event, Apple touts the competitive advantage it gets from designing its own chips for its flagship products. Apple still uses Intel’s x86 processors in its family of Mac computers.

The A12 has 6.9 billion transistors. The machine learning is nine times faster, but it runs on a tenth of the energy of the previous Neural Engine.

“The A12 Bionic processor is a beast of a chip and will be the first 7-nanometer chip to ship in a smartphone, meaning it can cram more features in it at the same size,” said Patrick Moorhead, analyst at Moor Insights & Strategy. “This year, Apple’s chip strategy shifted and it invested primarily into its Neural Engine and GPU versus CPU. This makes a lot of sense in that Apple already has a sizable lead in CPU performance and most of the new features delivered using ML and AI more highly leverage the neural processor and GPU. Developers, who now have access to the neural engine, must now do things useful and meaningful to take advantage of the chip over and above what Apple us doing with its own software and apps. Otherwise all this performance is for naught.”