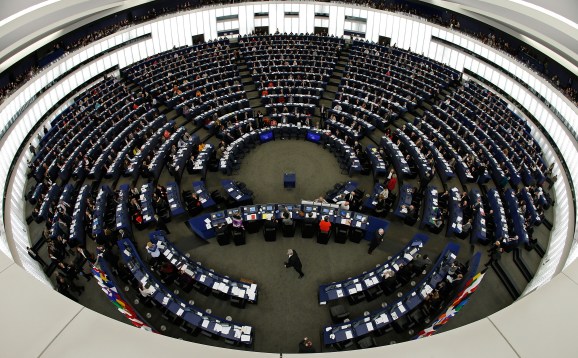 The European Union Parliament voted overwhelmingly to approve a copyright reform that includes two hotly debated measures critics have dubbed catastrophic for an open internet. But while the vote was a disappointment to opponents, it is also far from the final word on the matter.

The vote on Wednesday is what the EU calls a negotiating position. The measure now goes to a process called “trilogue,” which is a negotiation between the EU Council and the Commission, where the details could change again. Once an agreement is hammered out, the EU Parliament will vote again, likely sometime early next year.

In a joint statement, the vice president for the Digital Single Market, Andrus Ansip, and commissioner for Digital Economy and Society, Mariya Gabriel, praised the vote:

We welcome today’s vote at the European Parliament. It is a strong and positive signal and an essential step to achieving our common objective of modernising the copyright rules in the European Union. Discussions between the co-legislators can now start on a legislative proposal which is a key element of the Digital Single Market strategy and one of the priorities for the European Commission.

The two most heated parts of the Copyright Directive are Articles 11 and 13. The first would potentially allow publishers and newspapers to charge fees when search engines or social media platforms link to their content. The second would require online platforms that let users upload content to take even tougher measures to identify and take down material that has been copyrighted.

Proponents ranging from newspapers to musicians have been pushing hard for these reforms, saying online giants are making huge bucks off their work. Critics say the new obligations would be so onerous they would stifle free speech and could only be implemented by the very largest of companies.

Following the vote, MP Julia Reda of the Pirate Party tweeted her disappointment:

Catastrophic Article 11 vote: The European Parliament just endorsed a #linktax that would make using the title of a news article in a link to it require a license. #SaveYourInternet #SaveTheLink pic.twitter.com/hWti1XyoQi

Article 13 vote: The European Parliament endorses #uploadfilters for all but the smallest sites and apps. Anything you want to publish will need to first be approved by these filters, perfectly legal content like parodies & memes will be caught in the crosshairs #SaveYourInternet pic.twitter.com/bTEtXRS3qx

The legislation has already had a rocky year. Back in June, a parliamentary committee approved the text, but one month later, the full European Union Parliament voted not to approve it. That allowed additional time for amendments in advance of today’s vote. After some adjustments to Article 13 were adopted, the overall legislation passed — with 438 voting in favor, 226 against, and 39 abstentions.

This passage is likely to trigger another avalanche of lobbying against the measures, and the coming negotiations will likely be complex. The EU Council includes the heads of state of all 28 EU members states, plus the European Commission leaders. Wrangling an agreement out of the various competing interests will be far from straightforward.