Let’s face it: No one’s perfect. And that’s doubly true when it comes to spelling, grammar, and punctuation. But those writing mistakes could be costing you. Professionals with one to four promotions made 45 percent more grammar errors than those with six to nine promotions in the same time period, a recent study found.

That’s why Alex Shevchenko, Max Lytvyn, Dmytro Lider — three software developers based in Kiev, Ukraine — set out to build a cloud-based, algorithmic English-language checker that could proofread just about any document. They launched their solution — Grammarly — in 2009, and today they announced support for one of the most popular word processors on the web: Google Docs.

Grammarly on Google Docs launched in beta last month, but the integration goes live for more users this week. It requires the Grammarly for Chrome extension; when it’s active, you’ll see the Grammarly logo in the bottom right corner.

“It was one of our users’ most requested features. We basically had to build it.” Lytvyn told VentureBeat in an interview. “The challenge was [making] Grammarly work with Google’s rendering engine in their products. We spent a significant amount of time building something that’s robust enough so that when Google updates something, it won’t break.”

Grammarly checks for errors in real time as you type, underlining problematic phrases and words in bright red. Clicking on an error brings up a suggestion card with options to accept or flag it, ignore it, add it to your personal dictionary, or see an explanation. 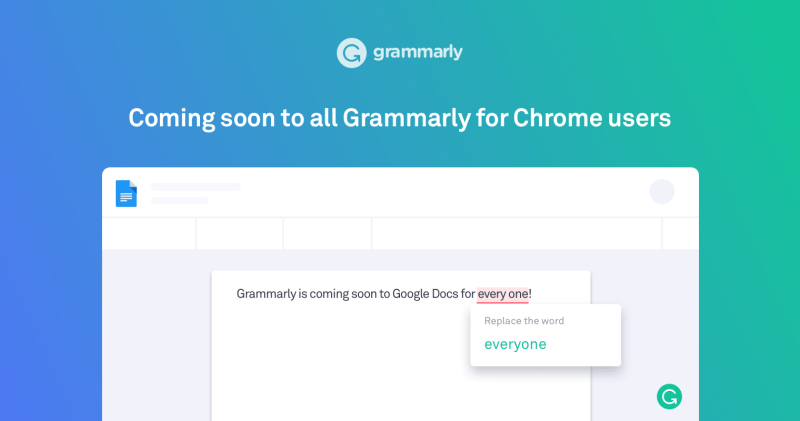 Not every feature is free. Citation suggestions and style suggestions are locked behind Grammarly’s $29.95 per month Grammarly Premium plan. So are Goals, which provide writing recommendations based on intents, audiences, emotions, and domains you specify.

And not all of the features have made their way to Google Docs at launch. One notable omission is Grammarly’s plagiarism detection, which finds unoriginal passages by scanning a database of 8 billion web pages.

Lytvyn said the team will push for “full compatibility” across all platforms in the coming months.

In addition to Google Docs, WordPress, Medium, and other platforms, Grammarly’s spell-checking tools are available on smartphones in the form of Grammarly Keyboard, a keyboard replacement for iOS and Android that scans text messages, documents, and emails for errors in four English dialects: American, British, Canadian, and Australian. Grammarly Premium users get style and vocabulary recommendations.

“Users are asking us to provide more support on mobile, because there’s so much communication [happening] there,” Lytvyn said.

For docs and platforms not supported by Grammarly’s Chrome extension or Google Docs integration, there’s the Grammarly Editor, a web-based word processor that recently got a fresh coat of paint. It can ingest files in a variety of formats (like .txt and .docx) and has the same suite of features offered through its other apps, plus Document Insights, which shows stats like the number of unique words used and the average length of those words, the estimated reading and speaking time, and an overall readability score.

In May 2017, Grammarly raised $110 million from General Catalyst, IVP, and Spark Capital in its first venture round. To date, more than 10 million people have downloaded Grammarly‘s Chrome extension, and across all platforms, it has more than 15 million daily active users.