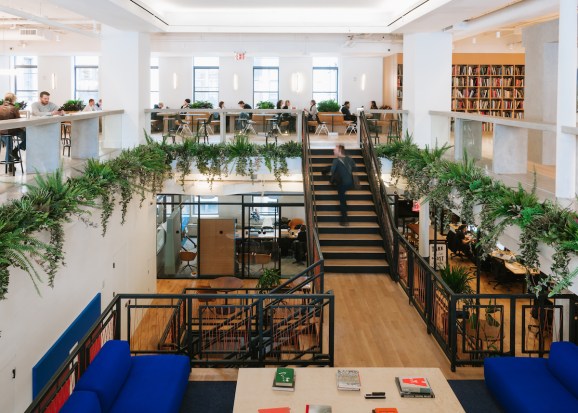 WeWork announced today that it has acquired Salt Lake City startup Teem as the coworking startup continues its quest to prove itself as a tech company.

Wired was the first to report on the news. According to Wired’s two sources, WeWork spent about $100 million on the deal. When reached by VentureBeat, a WeWork spokesperson declined to comment on the size of the deal.

Teem, founded in 2012, develops facility management software. Basically, it’s a meeting room booking system souped up with analytics tools to help companies figure out things like which rooms are being underutilized or when it’s time to purchase new tech for a conference room. Its more than 2,800 customers include Airbnb, Slack, Lyft, and Box.

“Teem has always had one goal in mind: to create an amazing workplace experience by eliminating hurdles to office productivity,” Teem cofounder and CEO Shaun Ritchie said in a press release. “In joining WeWork, we have found a true partner to support our continued growth and scale as we look to serve many more enterprises around the globe.”

“Acquiring Teem means bringing in a talented group of over 100 people to help us create a better, more efficient workplace experience for enterprises around the globe,” WeWork chief product officer Shiva Rajaraman said in a press release.

Teem will continue to operate as an independent business line in Salt Lake City. But its software will also be integrated into Powered by We offerings — WeWork’s bundled design, facility management, and technology services that it offers to companies with more than 1,000 employees. Launched earlier this year, Powered by We now has “more than 30 projects in the pipeline,” according to WeWork.

Salt Lake City, with its growing tech hub, should offer WeWork close proximity to plenty of future customers, as well as to tech hubs that Bay Area companies are interested in expanding to, including Austin, Denver, and Phoenix. WeWork doesn’t currently have any coworking spaces in Utah, but one is coming soon, according to its website.

WeWork, for its part, has battled skepticism from the past year on how it plans to deliver on its $20 billion valuation. Critics say that WeWork is just a glorified real estate company. As of August, WeWork was the second largest office tenant in NYC. Powered by We — and the Teem acquisition — will be critical as WeWork tries to prove that its massive real estate footprint will translate into lucrative enterprise software services.

Teem marks at least the second nine-figure acquisition for WeWork this year — the company acquired Chinese coworking space NakedHub in April for $400 million.

VentureBeat has also reached out to Teem’s Ritchie for comment, and will update this story if we hear back.