Three decades ago, a team at Massachusetts Institute of Technology’s (MIT) Newman Laboratory for Biomechanics and Human Rehabilitation investigated the use of robots to help stroke patients recover motor skills. The MIT-Manus Project, as it was called, discovered that mechanical exoskeletons could — when used to manipulate limbs in much the way a physical therapist would, albeit with greater precision — enhance the brain’s ability to bounce back from neurologic injury.

Fast-forward to 2018. Bionik Laboratories, a medical device and robotics company headquartered in Toronto, Canada and Watertown, Massachusetts, commercialized the tech through its acquisition of Interactive Motion Technologies (IMT), a group formed in 1998 to manufacture clinical versions of the MIT-Manus robots.

Bionik’s products principally target the roughly 800,000 people who experience strokes annually in the U.S. and the more than 6.4 million who suffer long-term ailments as a result of such incidents, but chief technology officer and cofounder Michal Prywata said they might one day assist a broader spectrum of disabled patients.

“Quite simply, they train body parts to function as they did prior to the [impairment],” Prywata told VentureBeat in an interview.

The machinery guides patients through repeated, identical motions in the course of a therapy session, leveraging the brain’s ability to reinforce, strengthen, and form new neural connections post-trauma (a phenomenon known as neuroplasticity). Embedded sensors enable clinicians to monitor current progress and compare it with past results. 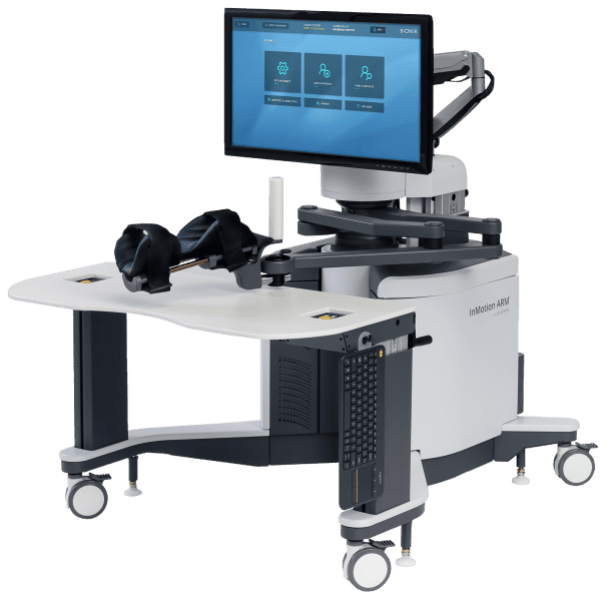 Above: The InMotion Arm.

As a result of the robots’ precision, wearers are usually able to perform significantly more movements per 60-minute session than with a human therapist, Prywata said — about 1,000 versus 60. Moreover, the sensors allow the system to adjust to movements in real time, maximizing muscle stimulation.

“They adapt — they’re sensing what a person is doing thousands of times a second,” Prywata said. “If the person isn’t progressing, they can adjust accordingly to trigger much faster recovery.”

Recovery time varies by patient age and severity of the injury, but Bionik claims most patients who undergo InMotion treatment see functional improvements in six weeks. Research involving earlier iterations of the robots found “small but statistically significant improvements in [the] quality of life” in patients and a “modest improvement in arm function,” according to Bionik. 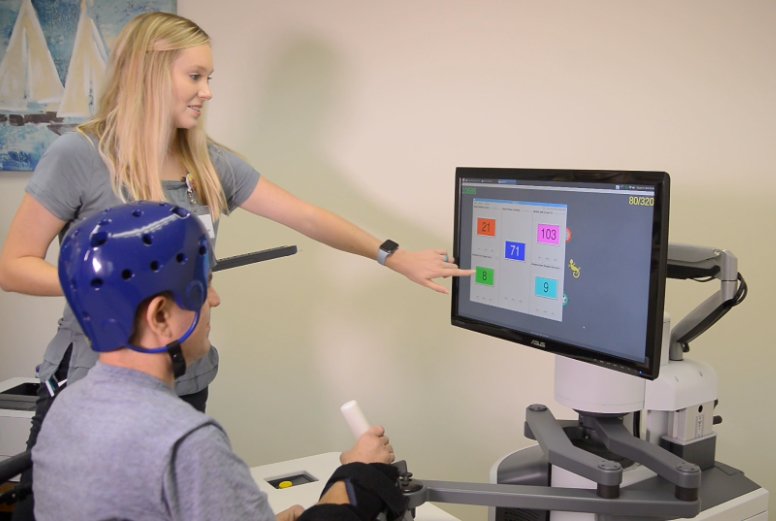 Above: A patient using the InMotion Arm.

The Department of Veterans Affairs has conducted pilots in a number of clinics, as have health systems in Asia (including Cardinal Santos Medical Center in the Philippines and Chungnam National University Hospital in South Korea) and parts of South America. In 2016, InMotion received an indirect endorsement from the American Heart Association, which in a report recommended robot-assisted therapies for upper-body motor rehabilitation.

Dylan Edwards, director of the new Restorative Neurology Clinic at Burke Medical Research Institute, oversaw deployment of an earlier version of InMotion Wrist and told Practical Neurology that patients “[get] better upper extremity function” as a result of using it.

“There’s now class one, level A evidence as a therapy that was published in Stroke to support the use of this technology,” he said. “We’ve seen them make clinically meaningful gains.”

The next frontier is Europe. Bionik is conducting a study — Robot Assisted Training for the Upper Limb after Stroke, or RATULS — involving 800 patients across four sites, which it claims is the largest of its kind. The company’s near-term goal, though, is reducing treatment cost, and to that end it’s developing miniaturized versions of InMotion products that might one day be administered at home for a tenth of today’s sticker price.

Prywata stressed that its robotic therapies today are comparable in cost to traditional physical therapy. In one study, sessions over a 36-week period came to $15,562 per patient for robot-assisted therapy — about $1,000 more than standard care.

“The biggest challenge with therapies is that they’re expensive and inaccessible. It varies by state, even,” Prywata said. “We want to solve that issue by reducing the cost and making them more accessible. You need to create accessibility for recovery to happen on a mass scale.”

Dovetailing with its miniaturization efforts, Bionik is developing a general-purpose, lower-body exoskeleton that isn’t explicitly a health product — Prywata said it’ll work for “anyone who wants a boost” in walking power — but it might one day be used for patients recovering from hip surgery.

Some analysts project the rehabilitation robot market will be worth $1.1 billion by 2022.