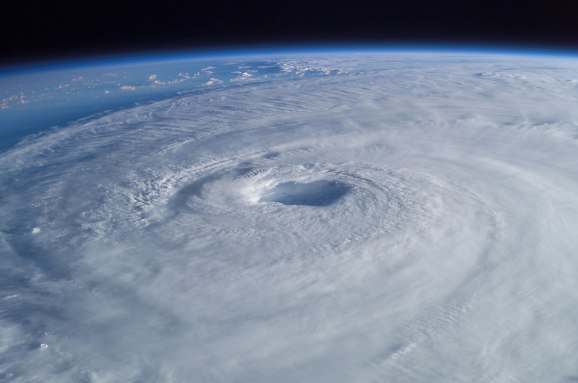 Hurricane Florence from above.

As Hurricane Florence bears down on the East Coast of the U.S., the storm‘s intensity is coming into sharp relief. The Category 2 hurricane had sustained winds of 105 miles per hour at the time of writing, with tropical storm-force winds stretching more than 335 square miles in all directions. Rainfall was predicted to reach 40 inches in regions of coastal Carolina, and Wilmington — which just had its rainiest year to date — might get eight months’ worth of rain in three days.

One firm closely tracking Florence’s progress is The Weather Company, the weather forecasting division of IBM, whose consumer-facing brands include the Weather.com, Intellicast.com, and Weather Underground. Its systems analyze more than 100 terabytes of third-party data and generate 25 billion customized regional models daily.

“Our models provide a forecast evolution of what the atmosphere is going to look like in the coming days,” James Belanger, a senior meteorological scientist for The Weather Company, told VentureBeat in an interview. “The system keeps in memory what the forecasts are all across the globe.”

In a pilot in Rio de Janeiro, Deep Thunder predicted floods and anticipated where storms might trigger mudslides. And in the U.S., it enabled a utility company to pinpoint where storms were likely to bring down power lines.

Another tool in The Weather Company’s arsenal is forecast runs from government agencies like the National Weather Service, which are typically released 10-15 days in advance of shifting weather patterns. They’re ingested and run through adaptive regression models — statistical models that automatically plot interactions between variables — that apply weight and bias corrections for any given target location.

“It’s a really scalable system,” Belanger said. “The calibration information is continually updated … We’re able to distribute temperature and precipitation forecasts for anywhere in the globe.”

So how does The Weather Data use that backend to track high-profile storms like Florence? While it defers to the National Weather Service on forecasted storm impacts — going so far as to impose what Belanger calls “guardrails and adjustments” that ensure its messaging remains in alignment — its consumer team employs analytics to identify the best times to issue alerts.

“They look at the times of day when consumers are most actively engaging our content,” Belanger said, “and make sure to keep people informed of rainfall and flood threats. It’s an important way we deliver messages and communications to people who are the most vulnerable.”