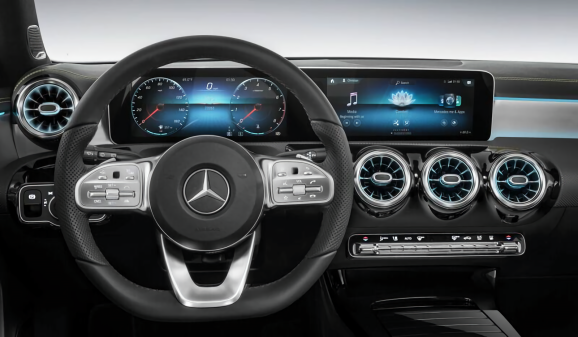 The carmaker’s MBUX voice features are the work of Santa Clara company SoundHound, which partnered with Hyundai in 2015 to design a custom in-car platform. It’s also responsible for the conversational interfaces in Nvidia’s Drive autonomous vehicle platform; in an interview with VentureBeat earlier this year, SoundHound CEO Keyvan Mohajer said that the company’s goal was to bring its AI to every device.

“Our platform allows our partners to integrate a better technology, maintain their brand and users, and differentiate and innovate,” he said.

The Mercedes-Benz implementation lets you perform tasks like switch on the heads-up display, get restaurant recommendations, and pull up sports scores with simple commands. Answers to some questions — about business hours, for example, or directions to a nearby service station — are sourced from “the cloud” and take into account the car’s location, Mercedes-Benz said. But other requests — namely those involving vehicle systems — are processed locally.

One thing Mercedes-Benz’s assistant can’t do: react when you’re tired. BMW’s bespoke voice assistant, which launched in September alongside the automaker’s BMW Operating System 7.0 software, changes the lighting, temperature, and mood of music when it hears, “Hey BMW, I’m tired.” It’s powered by Amazon’s Alexa tech and integrates with Microsoft Office 365 and Skype for Business, and it learns your preferences — like the preferred seat heating level and routinely visited destinations — over time. (Another fun touch: BMW drivers can name their assistant.)

Voice assistant usage is generally on the rise. About 52 percent of smartphone owners reported that they used voice assistants on their mobile devices, according to a Voicebot survey. And global smart speaker shipments grew 187 percent year-on-year in Q2 2018, with Google Home leading the way.